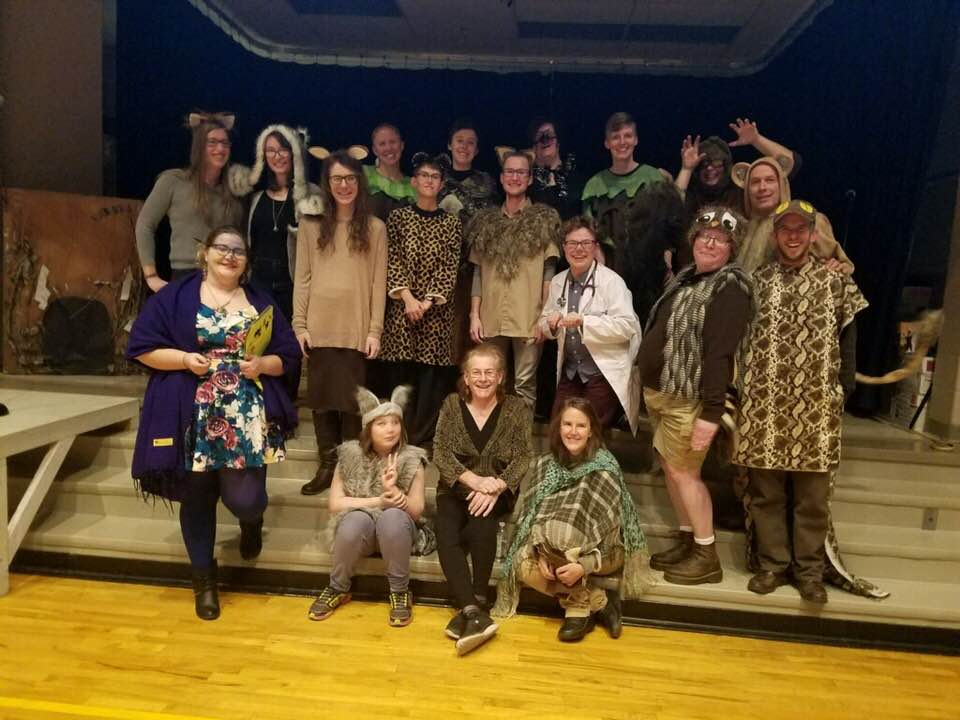 Phoenix, Colorado’s Trans Community Choir found ourselves at the center of controversy when parental complaint around our scheduled performance of our original play, Raven’s True Self, at a local elementary school was taken up by the CBS Denver News. The wholesome play, about a transgender raven in a community of animals and the importance of friendship, unconditional love, and being seen for who you are on the inside, was deemed as “inappropriate for children.” Concerned parents, who were invited to attend the performance, released a statement saying that “We are saddened that this highly controversial and divisive topic would be presented to such young children.” The story was also taken up by LGBTQ Nation.

Ironically, Phoenix—an intergenerational chorus with kids as members—had just performed Raven’s True Self at another local elementary school just days prior, where the school counselor had organized a post-performance Q&A with the 4th and 5th graders and the kids surprised us by singing one of the songs in the story back to us, complete with accompanying sign language that their music teacher had taught them, both of which were very moving.

Though the performance at the school which had generated the controversy was very intimidating—with not only hostile parents in attendance, but the local sheriff, school board representatives, and media—it had many positive outcomes. As a result of the press attention, many people have contacted Phoenix, wanting us to come perform at their school next. The school board took a strong public stand of support which was vindicating for Kai McKenzie, the Phoenix parent who’d written Raven’s True Self and had experienced lack of support with the same school board, as the Raven story had been originally written for their transgender children’s classroom until the teacher pulled the story at the last minute after finding out it had trans content (resulting in the kids, also Phoenix members, eventually being homeschooled). Bringing the story to Phoenix has allowed it to have much greater impact than if it had just been welcomed into the classroom in the first place. And the adversity was very bonding to the members of Phoenix.

Even at the controversial performance, the innocence and goodness of Phoenix shone through with many parents and school staff in tears throughout, visibly moved by the universal themes of the play. One mother of a trans child came over afterward and started sobbing as she shared how challenging their time at the school had been and how grateful they were for our presence in that environment. She told us how scared she’s been for her child after a 9 year old in Denver committed suicide just this August, 4 days into 4th grade, due to being bullied at school for wanting to dress more like a girl.

The controversy made Phoenix even more passionate about our work in the schools. Did you know that 75% of trans youth report feeling unsafe at school—two thirds feeling blamed by school administrators upon seeking help—and that school bullying leads to poor academic performance and high drop-out rates, which have been directly correlated to drug use, unemployment, homelessness, and incarceration? Struggling to find a sense of belonging in a culture that tells them that they simply don’t exist, 40% of trans youth have attempted suicide.

In Phoenix, we feel that transforming the environment in which trans youth are located is one of the most powerful ways to serve them. Since one of the main traumas of being trans is not having your experience reflected back to you in your surroundings, we are changing that for the next generation of trans youth by performing in schools. And as an intergenerational group with kids as members, we believe that music and performing are wonderful ways to engage gender expansive kids and to offer the role modeling and mentorship that they struggle to find elsewhere.

As a result, in the spring we are taking Raven’s True Self on the road! After our first choir tour this past April, performing at the Trans Voices Festival in the Twin Cities organized by One Voice Mixed Chorus, with performances scheduled with the River City Mixed Chorus and The Quire en route, this spring we are headed west for a collaborative concert with Transpose, the trans choir located in Portland. This time en route we plan to perform Raven’s True Self at elementary schools in Salt Lake City and Boise (home of a failed prominent 2015 court case involving trans youth activist, DW Trantham).

If you would like to support this important work in the schools, please consider making a donation to Phoenix: https://www.paypal.me/SamBullington/
Anything that you feel moved to contribute would be deeply appreciated.