Our member choruses have access to valuable resources, collaboration groups, commissioned music, and much more. Find out what membership in GALA Choruses can provide you and your chorus.

COAST (Come Out and Sing Together) brought together 1,200 individuals from 12 choruses from around the US for the first National Gay and Lesbian Choral Festival. All delegates sang in mass choir conducted by Greg Smith and were housed in one hotel. Commissions: Libby Larsen, Ned Rorum and Samuel Adler

37 choruses performing, approximately 2000 delegates. Most delegates housed in dorms. Performances were held in two halls on campus because the event was too large to fit into one hall. Commissions: Conrad Susa, Paul Patterson, Janice Gitek, Holly Near, and Bernice Johnson Reagon

140 choruses performing including ensembles, over 5000 delegates. This Festival marked the first time choruses did not perform in both halls. Commission: anthem that everyone sang

2002 Regional Festivals in Seattle and Cincinnati

163 choruses and ensembles performing, 4750 delegates. First festival outside of the US. First time there were no morning concert blocks.

171 choruses and ensembles performed with over 6,600 delegates participating – another new record! Over 800 tickets sold in the local Denver community. First ever live broadcast of major portions of festival with over 21,000 total views. Commissions funded by GALA included works by Nathan Hall, Kala Pierson and Mari Esabel Valverde; many other new commissions were presented by the participating choruses. 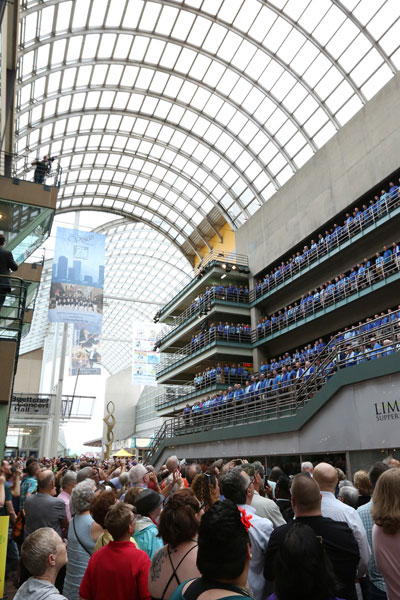 “This was the best event I have ever played. GALA Festival restored my hope for humanity.”