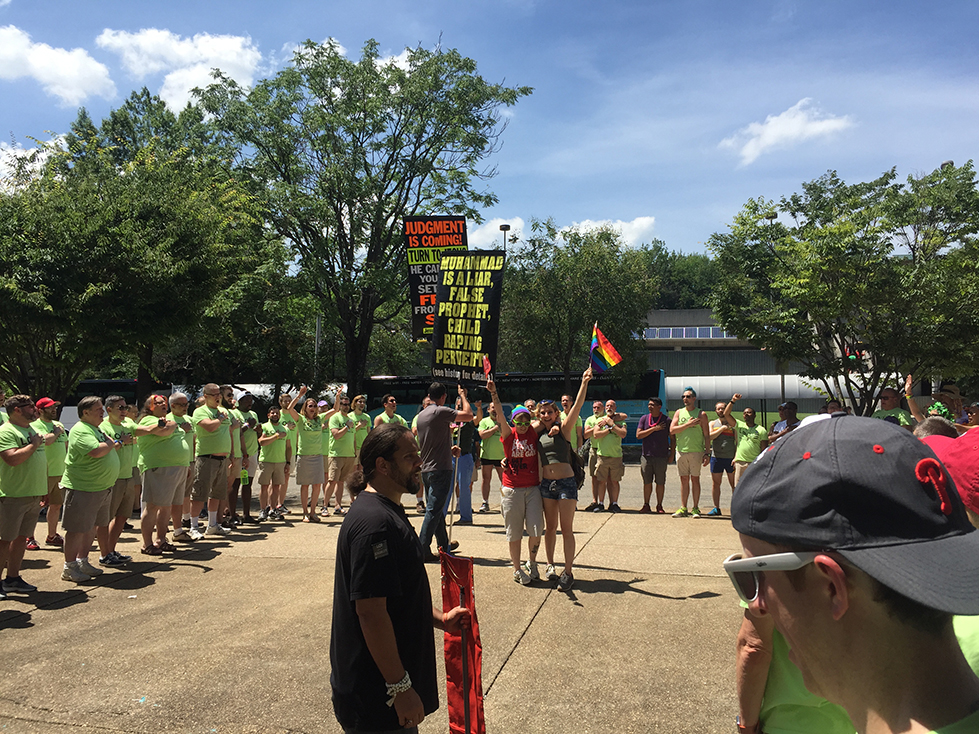 Moving the Needle with Love

We had just boarded the buses following our performance at the Knoxville Pride Festival when we saw several protestors at the festival’s entrance, so we asked the drivers to pull over. Our 100 singers unloaded the buses and crossed four lanes of traffic to get to the other side of the road where the protestors where shouting the hateful remarks also written on their signs. We were in the midst of gathering when one of them approached us. I blew the pitch pipe, yelled “Seasons of Love,” cued the chorus, and we instinctually encircled him while commencing to sing. He shouted louder and louder, so we raised our voices, increasing the dynamics with each musical phrase. As we stood in the blazing heat, encircling the hate in our bright green t-shirts from the March for Equality and Pride, the protestor walked within the circle, standing before each of us, looking at each of us one by one, with eyes that emitted fear and loneliness. He continued to shout, and we continued to sing. We next sang “Make Them Hear You,” then “We Shall Overcome,” and finally, “The Star-Spangled Banner.” At that point a young woman named Tessa entered our circle, proudly carrying a Pride flag. She held it up high against the protestor’s sign, covering its hateful words. Our singing literally drowned out hate that hot afternoon. 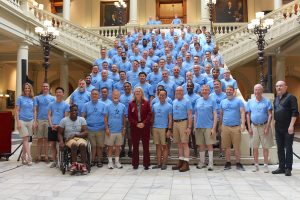 That evening we performed a concert at the Tennessee Valley Unitarian Church, a venue recommended to us by a pastor at a Unitarian church in the Washington, DC area. She said we should sing there because “they could use your love.” She explained that a few years prior a man entered the church during a youth ministries program and shot nine attendees, killing two, while shouting hateful and disparaging words against the LGBTQ community. This congregation is still reeling from having been violently shrouded in hate that night. Our coming to town and singing for the church members gave this congregation an opportunity to heal. One of its members later said that she wept all the way home following our concert, as our being there helped her to feel the hope and love that was ripped away so violently years ago. Also in our audience that night was social justice activist Candice Carawan, who with her husband made “We Shall Overcome” the protest song it is today. That night she led us, hand in hand, in song, and at once we were shrouded with love, and filled with humble gratitude for this activist’s life-long work.

Our final performance in Knoxville was back at the Tennessee Valley Unitarian Church the following morning, singing as part of their Sunday service. In advance of our arrival I had sent their pastor a list of our songs, from which she chose “Seasons of Love” for the offertory, and “Raise You Up/Just Be” as the recessional. In my response to her I clarified that the second piece wasn’t Josh Groban’s song, but that from Kinky Boots, to which she replied “Yes, I know, that’s what we want!” So there we were: 100 queer singers crammed into the choir loft in a small southern church, three dancers at the altar in stiletto boots and exposed midriffs, and Lola, all singing at the top of our pride to close the morning service!

We knew we’d have an incredible experience on tour but we did not expect to make such a deep connection with each person we met, with each story we heard, with each venue at which we sang, and with each town we visited. There are countless stories of evidence of that connection in those short four days, and likely countless stories we may never know. Many folks who heard us sing came up to us, often with tears in their eyes, to simply say “thank you” (and in keeping with southern hospitality, always with an extended invitation to return again!). And our collaboration and connection with four GALA choruses (Midland’s Men’s Chorus, Atlanta Gay Men’s Chorus, Steel City Men’s Chorus, and Knoxville Gay Men’s Chorus) was an added bonus!

The biggest surprise in taking this tour is summed up in the words I have heard our members speak to describe our experience: cathartic, life-changing, and humbling. I often remind our singers that there is someone who needs to hear us each time we sing, and sometimes that person may be the person singing next to you. Many of our members are originally from the south, and many have church backgrounds, some not so pleasant and accepting. To have the opportunity to return, out and proud with voices raised high, was tremendously healing and empowering for many members. And the opportunity to travel as a group and share these emotional reactions with each other was priceless.

Since we have returned from the tour, emails and posts have arrived from around the world acknowledging the videos of our singing against the haters at Knoxville Pride. An elementary school teacher in Dublin wrote to tell us she played the video for her young chorus, expressing that she is so very inspired and proud. Tessa (the woman who entered our circle in Knoxville with the Pride flag) wrote to say that it was her first Pride festival, and said “I will never forget that moment everyone sang the national anthem to my little flag. It filled me with so much joy to know I could proudly stand in front of a group of complete strangers waving a symbol of love and acceptance.” A woman in our North Carolina audience wrote “The spirit of love we felt will be spread all over Chapel Hill, thanks to your generosity!” And a Knoxville resident said “Thank you for all you do for us country boys.”

The Southern Equality Tour may be the most significant thing GMCW has ever done. We sang to empower and encourage those already doing the hard work in those southern states. We returned home reenergized to continue that work, standing up to the equality needle, tapping it—always with love—with our voices raised high. Because someone always needs to hear us.