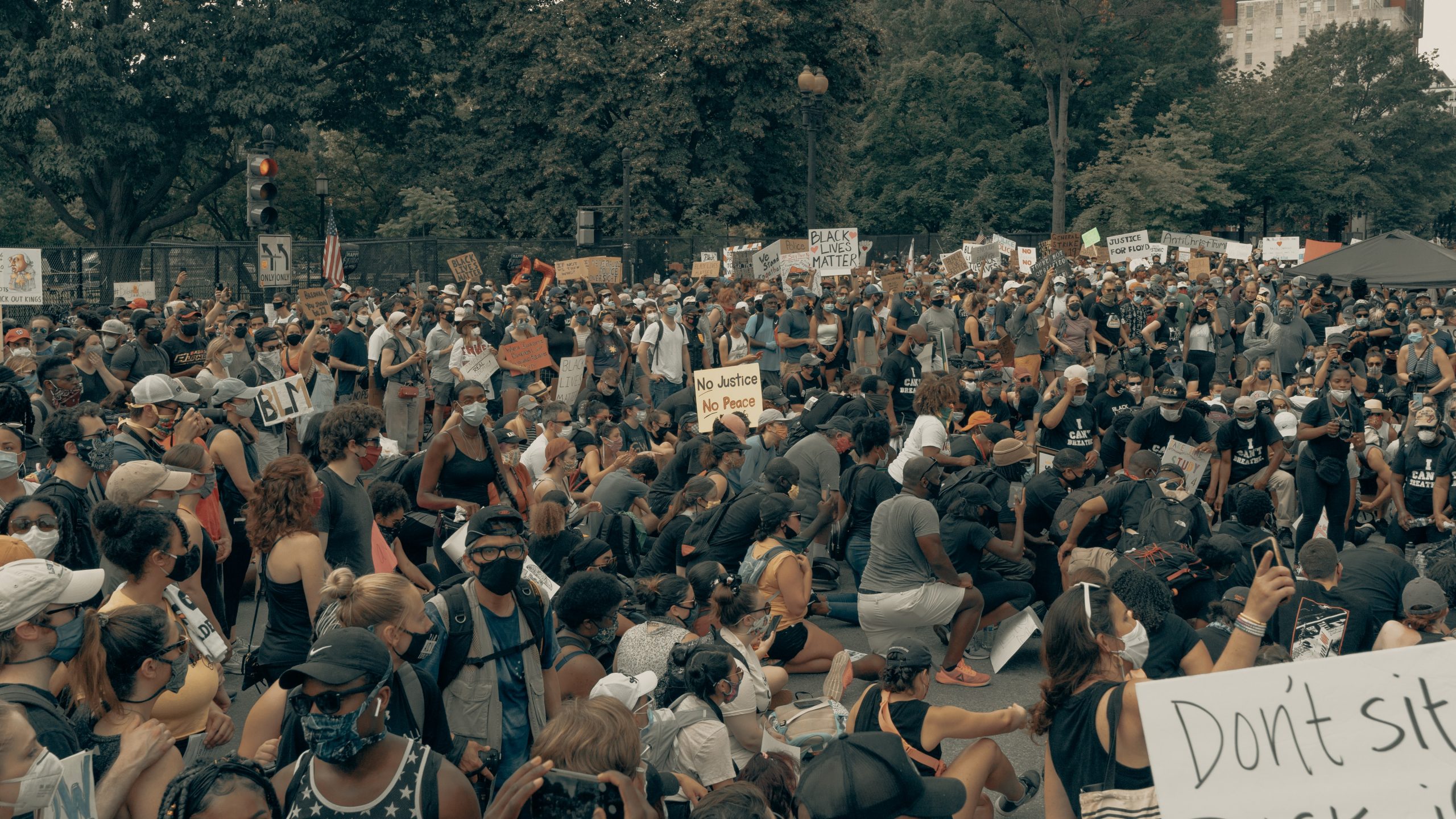 Many organizations and businesses, including many GALA choruses, released official statements condemning racism in the wake of the public execution of George Floyd in Minneapolis. Some of these statements were heartfelt, some were painfully missing the point—filled with trivializing clichés about “how similar we are despite our differences,” invalidating the specific anguish being articulated by Black people currently. Phoenix, Colorado’s Trans Community Choir believes that statements are largely meaningless unless they are followed up by fervent and consistent action.

Therefore, rather than releasing an organizational statement, Phoenix shared our concrete action plan.

Rather than going on our usual summer break, Phoenix commits to this 3-pronged plan for summer.

LISTENING AND LEARNING: Wherever we are in our lifelong journeys of educating ourselves about racial inequality, we recognize the urgent need to listen to Black voices. So this summer we are prioritizing reading and discussing books by Black thinkers and activists so that we can further educate ourselves about the experiences and insights of Black people, as well as the complex and insidious ways that racism structures our society. In addition to reading books by Black authors, beginning with Ibram Kendi’s How To Be An Anti-Racist, we are using our rehearsal time to together watch and discuss similarly themed documentaries (beginning with 13th). White people are accustomed to being at the center, being the “expert,” and hearing mostly white voices and white viewpoints, so we are intentionally interrupting that dynamic.

REFLECTING AND HEALING: We see white privilege as a harmful deficit—one possessed by all white people—that we are intent on working to heal and transform. The invisibility of whiteness is one manifestation of white privilege, as whiteness is seen by many as equivalent to “normal.” Therefore, we are holding whiteness under scrutiny and exploring our dysfunctional white training and the ways that it limits us in our humanity, especially in our ability to take action to support and co-create with people of color. In Phoenix, we talk a lot about transgressing norms—which usually means gender and sexual norms. Transgressing norms is a big aspect of Phoenix culture. Currently we are doing the exciting work of recognizing, challenging, and breaking racial norms, encouraging ourselves to be as feisty and non-compliant in our relationship to the norms of whiteness as we are to the expectations of the gender binary. Rather than using our trans identities as an excuse to opt out from racial transformation work, we are utilizing what we’ve learned from our trans journeys to actively work to liberate ourselves from the teachings and practices of a toxic and dysfunctional white culture and we are learning how to co-create a world based on different values.

ACTION: We move beyond merely cultivating awareness by taking specific local actions in alignment with the demands of Black activists. Currently that is expressing itself in three ways. Choir members are gathering with signs daily from 4-6pm around the corner from where Phoenix rehearses. Our ongoing daily protest has been transforming our local community in measurable ways—making it safer for people to care and more uncomfortable to not care—as well as providing a profound learning experience for choir members, many of whom have never engaged in street protests before. Since our protests are in alignment with social distancing guidelines as well, they have given people empowering opportunities to take concrete collective action in support of Black lives. Secondly, since the main action being called for nationally right now is to defund the police, we are advocating for the removal of SROs (police officers who work in schools) from our local school district. This is a particularly appropriate project of action for our choir since we have longstanding ties with the school district due to our performances of our Raven play in local elementary schools over the last several years. https://www.lgbtqnation.com/2018/11/colorado-school-fire-allowing-trans-choir-performance/?fbclid=IwAR3h7Fc71YMR9Ac7sN6iqNDSjP61mqkPduwck_9RjaN6JsW6hi5S24lVHAA Finally, members of our choir are organizing a livestream fundraising concert to raise money for Black Lives Matter. 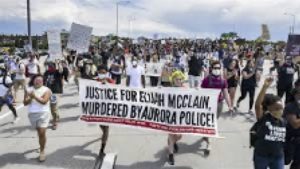 White people are not spectators in the struggle against racism. Racism is a dysfunction of white people and it is the responsibility of white communities to heal and transform it. For most of us, this requires facing discomfort and cultivating endurance. But as Robin DiAngelo—author of White Fragility—writes, “Rather than retreat in the face of that discomfort, we can practice building our stamina for the critical examination of white identity.”

Many GALA members consider their choruses to be crucial safe spaces in an unsafe world. Unfortunately, this feeling is what can keep LGBT spaces white. When we come together to bond around one identity, we often unconsciously believe that this identity is the only or most important identity that is in play, ignoring other identities—such as race—that are equally salient. Rather than being a safe space, Phoenix is a brave space. Phoenix is not a place where we collapse into comfortable homogeneity, but instead a place of leadership and capacity building where we lean into discomfort to remain on our growth edge. This is what gives Phoenix its vitality.

As a community, whether we realize it or not, trans people expect and demand a LOT of cisgender people and can be harsh when cisgender people don’t get it or can’t keep up. We expect cisgender people to skillfully adjust as the whole framework for their experience of life (the gender binary) is shattered. We expect cisgender people (friends, family, colleagues, the general public) to not only recognize and understand our ever-changing gender identities—which most have never even heard of and which are completely counterintuitive and unintelligible to them—we also expect cisgender people to name their own pronouns, requiring them to think of themselves as gendered beings in ways they aren’t accustomed to. White people are not accustomed to seeing themselves as racialized beings and doing so now—and really grappling with what that has meant for us individually and collectively—is a big part of what is being asked of us right now. Since trans communities expect cisgender people to work very hard emotionally and practically in order to help make the world safer and more welcoming for us, I feel strongly that white trans people need to be ready and willing to work equally hard to help make the world safer and more welcoming for people of color.

In thinking about those who are most impacted by the physical and structural violence targeting trans people, racism is the biggest danger facing trans communities. What would it look like for trans communities to make addressing racism our top priority? Every November, around the U.S., largely white trans communities come together to mourn the loss of those largely Black, generally feminine-presenting transgender people who have been killed in the previous year. There’s always an air of awkwardness and uncertainty in the room to be claiming people for “our” community that may or may not have felt a sense of “us-ness” with white trans communities. This year we have the opportunity to change that. 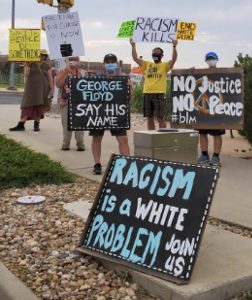 While thousands of people around the world have taken to the streets to protest the murder of George Floyd and others such as Colorado’s Elijah McClain, such hate crimes are just the extreme tip of the iceberg. White LGBTQIA communities have the particular tools to understand racism better than most whites because we have lived experience of the difference between homophobia (the emotional reaction of fear, intolerance, and hatred that can lead to acts of discrimination or hate crimes) and heterosexism (the even more damaging ways that our entire society is organized from a heterosexual frame that advantages heterosexuals and makes LGBTQIA people feel unwelcome).

Especially during this time of rights being given (by the Supreme Court) and rights being taken away (by the President), I hope that LGBTQIA communities will lend our sustained attention to the liberation of Black people in this country and add our best energy to the historic transformation happening in this country. The Stonewall Riots were started by trans women of color. All LGBTQ people owe their liberation to people of color. Stand up for theirs.