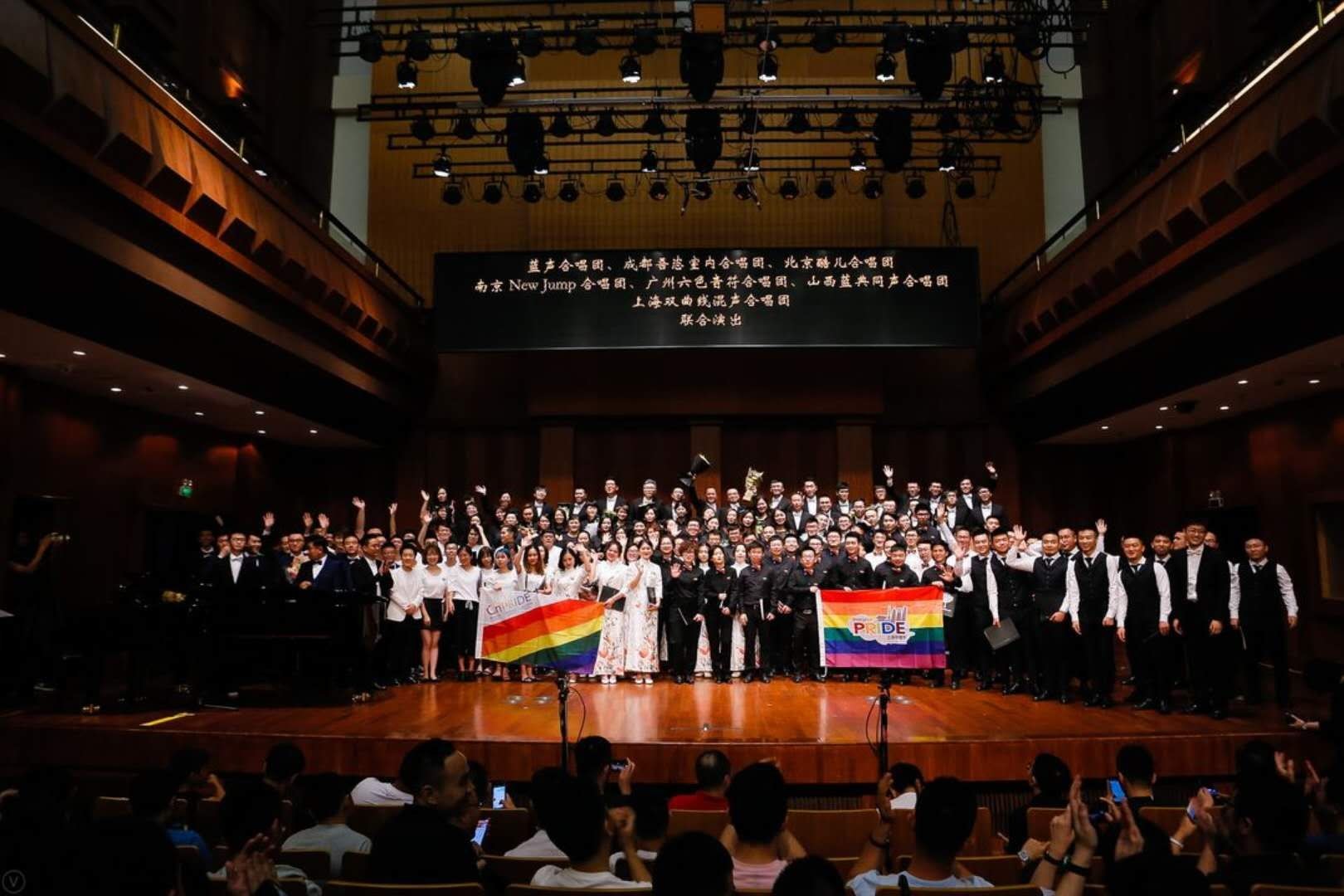 Asian Queer Choirs: a Perspective in 2018

The concept of “Asia”, particularly as a cultural signifier, has always been problematic. It assumes a high degree of commonality across what is the world’s largest continent, and has been used to homogenize and “other” what is a hugely diverse swathe of people. When Proud Voices Asia, the Asian LGBT choir network was set up, one of its greatest challenges therefore lay in trying to find coherence in this variety, not just in general terms like language or social structure, but more specifically in concepts like “queer”, “choir” and “activism”, while celebrating the multiple contexts in which they exist.

One of the privileges of co-ordinating Proud Voices Asia is that I am often given hints of how this might be explored. In 2018, I travelled to India to sing with Rainbow Voices Mumbai, rehearsed with the Sing Men’s Chorus in Singapore, helped bring the Turkish choir Yedi Renk Koro to Europe’s Various Voices LGBT+ choir festival and spent my summer vacationing in South Korea and Hong Kong where I met with the two choirs in each country. Proud Voices Asia also has a separate Chinese-speaking subgroup with representatives from the queer choirs in China, Hong Kong, Taiwan and Singapore. The constant connection has made me hyper-aware of the unique environmental challenges faced by all these choirs, but also the fundamental similarities in their responses.

In South Korea, for example, the summer Pride marching season has been rocked by occasionally violent anti-gay protests. In Incheon and Jeju, this has led to participants being hospitalized and Pride events being cancelled. Personally, seeing this level of organized homophobia came as a shock, but G_Voice and Unnie Choir were in the thick of it, singing and standing up for their rights. As discomforting as this may be to those unused to confrontation, South Korea has a unique history of direct action, and as a result the choirs there also have a justified expectation that all performances are to some degree also acts of protest.

This stands in stark contrast with the choirs in Japan, reflecting Japanese culture in general with its aversion to overt conflict. Most of the queer choirs there tend to be inward facing, focussing on internal community building over outward expressions of Pride. Over the last few months, however, there have been increasingly vociferous debates in the Japanese parliament about anti-discrimination laws. Tokyo ward has recently passed legislation banning discrimination based on LGBT+ identity, but there continues to be very loud, usually rabid and often insulting speeches being made by more conservative senators. It has exposed ideological rifts in Japanese society which typically avoids difference, and it is interesting to observe that the act of organizing our next Hand in Hand Asia LGBT+ choir festival in Tokyo has mobilized those who would like to see change happen there.

While one would expect differences at the international level, it may come as a surprise that there can be alternative approaches even within a single city. In Hong Kong for example, the Harmonics may be loosely characterized as a more English-speaking and affluent choir, while Elements Choir is mainly Cantonese-speaking and more financially constrained. Both choirs operate in different but complementary niches in the city, which highlights the intersection of linguistic and socio-economic divisions with LGBT+ identity there, and how the narrative around LGBT+ identity often has the appearance of being of Western-derivation. These barriers present a definite challenge when it comes to the wider social acceptance of the LGBT+ community in Hong Kong and both choirs acknowledge that music is an important way of bridging that divide.

In India, the big news this summer has undoubtedly been the striking of Section 377 which criminalized homosexuality from the Indian Penal Code (IPC). In its wake there have been massive celebrations around the world and the implications specifically for the Indian people, its wider diaspora and other countries whose laws are derived from the IPC will be huge. Rainbow Voices Mumbai, a product of Yaariyan: the LGBT youth organization in that city, has always been vocally supporting the decriminalization of homosexuality there, so this summer’s verdict comes as a vindication of their continuous efforts.

On a personal note, however, scrapping Section 377 in India has galvanized support for a similar repeal of Section 377A in Singapore, with prominent thinkers and members of the public coming forward to petition for its removal. A test case is making its way through the courts. In many ways, Section 377A, despite claims that it is not enforced, has a much more pervasive effect on Singaporean society than in India. Sing Men’s Chorus, already a fixture at the nation’s Pink Dot LGBT event, has thus been more restrained in how it engages with this particular debate. Indeed, it remains to be seen how things pan out – any optimism for change must be tempered by Singapore’s history of authoritarianism – but, with the enthusiasm galvanized from the Indian ruling, things are looking up in my island home.

From a choral perspective, this year also saw the inaugural all-China LGBT+ choir festival which took place in Shanghai and involved seven of the middle kingdom’s queer choirs. Next year, Proud Voices Asia is looking forward to the third iteration of our own Hand in Hand LGBT Choir Festival in Tokyo from 12 to 14 April. The festival is being hosted by three of the Tokyo-based gay choirs, and this time round we have 16 choirs participating and around 500 participants. This may not seem large to those of us used to GALA and Various Voices, but it represents an exponential growth of which we are proud and somewhat surprised, but which has also stretched our organizational capacity.

Most of the choirs participating come from greater China and Japan, and there are several choirs for whom this will be their virgin queer choral festival experience, including representatives from India (and hopefully Burma) for the first time. Our from-scratch choir also has members from Indonesia, Thailand, Malaysia and other Asian countries which do not have their own established choirs; we hope that this will serve as an impetus for the formation of LGBT singing groups in these places.

Proud Voices Asia endeavours to recognize all these differences, but as an organization that also tries to be representative of Asia, finding commonality is our raison d’etre. This commonality must overcome significant geographical and historical divisions, yet cannot be something which can be externally imposed; instead, it has to be discovered organically, through conversation, exposure to and an understanding of each other’s experiences. We already share our love for raising our voices in song, but by creating a space such as the Hand in Hand Asia festival where this interchange can occur, a new, queer and distinctly Asian voice is allowed to grow and be heard: one influenced by, but not beholden to, indigenous and post-colonial pasts and a neo-colonial present.

Hsien Chew
Hsien Chew sings with the Pink Singers, London’s LGBT community choir, and is a driving force behind the Proud Voices network for choral activism in Asia.