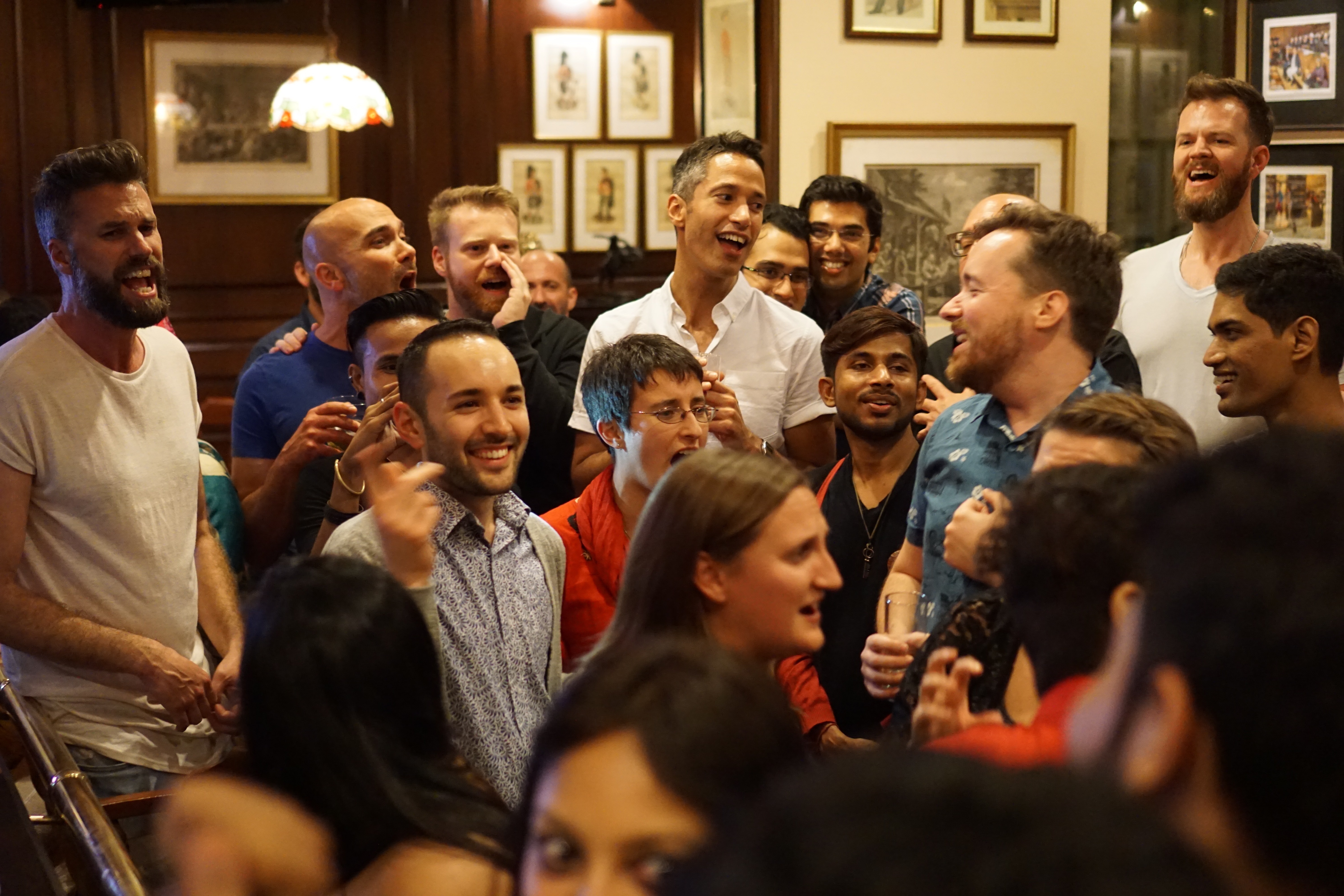 In January 2017, the Pink Singers – London’s LGBT community choir, travelled to India to perform with Rainbow Voices Mumbai, India’s first LGBT choir, in a ground-breaking concert called “We Shall Overcome” at the National Centre for the Performing Arts, and to march with them at Queer Azaadi Mumbai – Mumbai Pride. Preparing for such a choral exchange was an extended process, not only because of the logistics involved, but also because the UK and India share a complicated colonial history, and because homosexual acts remain criminal in India under Section 377 of the Indian Penal Code. Here are our top tips to helping our choral visit run smoothly in the face of such obstacles.

The first law of any international visit, particularly to places where being gay is illegal, is a variant of the Hippocratic Oath to do no harm. Nascent LGBT movements are vulnerable with little to no legal support and frequent political and governmental antagonism. Assuming that they will appreciate your visit is the first pitfall to be avoided – a big showy entrance can draw attention to budding activism and may bring down forces to crush it which, as a privileged visitor, you may never notice. This does not mean a visit should not be attempted; it does mean that communication is key, particularly with local organizations which have a deeper understanding of the situation on the ground.

In preparation for the Pink Singers’ visit we first contacted Rainbow Voices Mumbai to glean their take on the situation. When we were reassured that they thought our visit would be beneficial to them, we then went on to discuss how best to frame and publicize our visit with local LGBT activist organizations. Our main interaction was with Mumbai’s largest LGBT organization, the Humsfar Trust, from whom the driving concept of the concert – to change people’s perception of what an LGBT event in India is – came. It was also decided, on collaboration with the National Centre for the Performing Arts, that for security reasons, and to avoid the attention of and potential confrontation with more extremist elements, the concert would only be advertised to a highly targeted audience on social media and at a special pre-Pride party called Gulabi Mela.

If you are in an LGBT choir the odds are that you are fairly active in your local LGBT community and have a good idea about queer identity in general. It cannot be assumed, however, that what is true in the West is equally applicable to countries in other geographical areas, and it is important that the members of your choir understand that before they go.

Six months before the planned trip, I attended the Queer Asia conference at the School of Oriental and African Studiers to meet academics working in queer studies with a focus on India. Three of them, separately talking about the gay, lesbian and transgender experience, and joined by the founder of Rainbow Voices Mumbai over Skype, then addressed a special seminar which was organized for members of the Pink Singers. What came out of the discussion was a breaking down of preconceptions and a resetting of the lens through which LGBT society in India was viewed.

For instance, the gay experience in India, perhaps more so than other places, is dependent on the intersection of sexuality with education, wealth, social class, caste and religion amongst other factors. The conventional argument that the law should not intrude into an individual’s private space is irrelevant if there is little to no personal space in India, particularly for women. The term “transgender” is not an accurate descriptor for the third-gender identified hijra and kinnie communities in India who have existed since Mughal times, and who have made remarkable legal and social gains in the last few years.

In reality, when we arrived in Mumbai, the Pink Singers’ experience of what LGBT life is like in India was guided by the people we met. Given the brevity of the time we spent there, and the limited opportunities we had, our encounters were with a very narrow segment of society who were, indeed, not so different from LGBT people you’d meet right here in London: independent, digitally-connected and proud. It was, however, valuable for us to be reminded that ours was a highly curated experience and that there is a far greater diversity to the LGBT community in the subcontinent that we did not see. 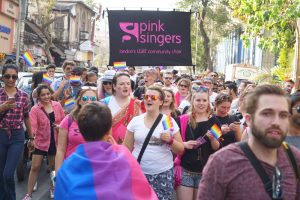 One of the most magical moments of any trip is getting to know your counterparts in your host choir on a personal level. Given the constraints of time and the demands of rehearsals and a performance, however, opportunities to mingle may be quite limited, so these need to be built into any programme.

Rainbow Voices Mumbai and the Pink Singers took great pains to maximize these opportunities to get to know each other from the very start. The first event on the schedule was a seminar, held at the American Consulate General in Mumbai, based on the topic of LGBT representation in the arts in India, UK and USA. It was a highly topical conversation given events currently happening in Bollywood. Onir, the director of a seminal gay film ‘My Brother Nikhil’, was our guest speaker and gave us an authoritative insight into the topic.

When it came to the question and answer session at the end a thicket of hands went up, and the animated discussion which followed flowed into the dinner and karaoke afterwards. In hindsight the seminar proved to be an important semi-structured icebreaker which allowed members of both choirs to share stories related not only to the topic, but of coming out, first loves and family tensions as well as pop music, shopping and fashion. The ensuing conversations over rehearsals of joint songs, dinners, on excursions and at the after show party simply cemented our new friendships. A goal of this trip was to give members of our choirs a better understanding of each other’s contexts and in this we were successful.

Travelling to India was a huge challenge for us. The Pink Singers is quite used to zipping around Europe and even North America, but this was the first time we had gone to Asia in a large contingent. To compound things, the majority of us (including me) had never been to India before, and so there were many variables to consider – accommodation, transport, visas, currency, vaccines, diet – even before we thought about issues such as our safety as an out LGBT group.

Our other priority was in keeping the trip as affordable as possible to our individual members. This meant ultimately that we had to organize the trip ourselves rather than rely on an external travel agent. Thankfully a combination of local contacts, experience of some of our members and the all-knowing internet meant that many of the bigger humps could be ironed out well in advance, even if a number of potential issues remained uncovered. Trying to illustrate what the trip would be like in the face of this was one of the greatest challenges, and while we had built-in safety nets including clear lines of communication and internal medical cover, we did stress that this trip would be unlike any other we had undertaken before, and advised our members to adjust their expectations accordingly.

In the end, perhaps because of the gallons of hand sanitizer we shared, very few of us fell ill when we were there, many of our concerns proved to be groundless, and with only a few hiccoughs, the trip went very smoothly indeed. This was all down to good planning so, as the scouts say, “Be Prepared!”

The Pink Singers India 2017 project was never just going to be about our trip to India and we were determined that it should not end with our visit to Mumbai. In fact, 2017 marks the 50th anniversary of decriminalization of homosexuality in England, but it is that Victorian law which persists today in India and many other former British colonies as Section 377.  The broader theme of our project is to highlight this injustice not only by showing solidarity with our friends in India, but also drawing attention to the issue here at home.

As such, we started planning for Rainbow Voices Mumbai’s return trip from our very first meeting. It seemed like the right idea when we started, but now that we have made new friends in the choir we have a much better understanding of how important and valuable it would be for them to visit a city like London with much greater freedoms than they are used to, and what effect their presence can have on educating people here about the colonial legacy on international LGBT communities. 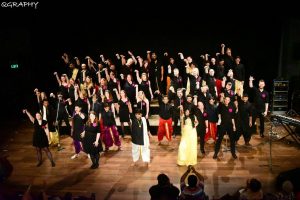 You can help us reach our goal! Donate via our website www.pinksingers.co.uk/india2017 or email chair@pinksingers.co.uk for more information. We hope that this will be one of many long standing collaborations in the global LGBT choral community as we work towards our shared goals of LGBT equality.

Hsien Chew
Hsien Chew sings with the Pink Singers, London’s LGBT community choir, and is a driving force behind the Proud Voices network for choral activism in Asia.