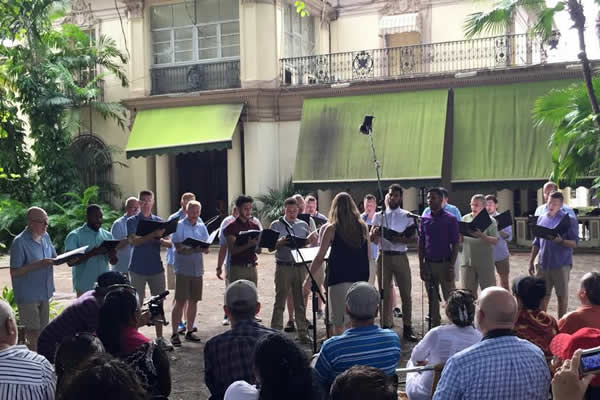 A Healing Visit to Cuba

Our sense of responsibility was immediately felt when we were greeted by a standing ovation for our tour kick-off concert at the Trinity Cathedral in downtown Miami the night before our departure for Havana. The next morning, with 76 pounds of arts supplies, medicine and toiletries to donate in tow, we boarded a chartered flight that, a mere 45 minutes later, transported us to another world. We were embarking on a historic tour, with music as the vehicle to say what we might not otherwise be able to say in conversation, not just because of the language barrier, but because the Cuban policies of controlled speech might create a challenge between our audiences and us in the week ahead.

Our first impressions of Havana were that of an abandoned city, stuck in time with its dilapidated buildings and old cars. But the beauty of the country and the culture immediately came into focus, and any trepidation as to how we would be received as Americans and as gay men vanished quickly.

Cuba has a well-known history of censoring nearly everything except music and visual art. Many of our performances included a cultural exchange, where we sang for another chorus or dance company, and they performed for us. We performed nine formal concerts, and another dozen impromptu performances at various restaurants in Havana, including the famous Buena Vista Social Club. We sang for toddlers and seniors, students and dignitaries. When we asked for a volunteer to hold a Pride flag while we sang “Over the Rainbow,” a man waved it high throughout the rest of the concert and afterwards asked if he could keep it. He explained with tears in his eyes that, as a gay Cuban, it was the first time in his life he had held a Pride flag. This same man asked us “When did you feel heard?”

The week was full of small moments to ask big questions. We were told by one gay man, “I have waited for years for this.” An elderly woman said she was looking forward to the opening of the embassies on July 20, when the flags of both nations were raised side by side. With every song we felt an emotional connection. The audiences were tremendously gracious and appreciative, and responded to our music and our message with smiles and joyful tears. It was so easy to connect, and the common theme was love. We were meeting Cubans face to face, as individuals, sharing our story through song. We sang for LGBTQ equality, and we sang to strengthen the handshake between our two countries. We sang with great pride, and with tremendous humility.

One of GMCW’s anthems is Stephen Flaherty and Lynn Ahrens “Make Them Hear You,” a song about speaking up for that in which you believe. We sang it throughout the tour in Spanish, and each time the audience applauded and cheered as we sang the final lyrics:

We touched many lives on this tour, including our own. There is a lot of work yet to be done for LGBTQ equality in both countries. We have taken an important step with this tour, and we were able to open and heal the relationship one step further through the international language of music.