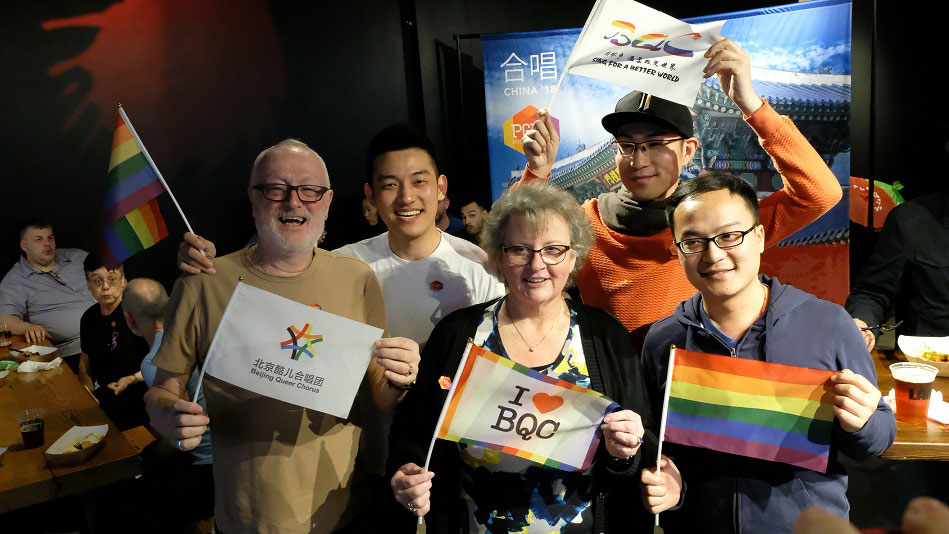 March 3, 2018
Day retreat. OMG, it’s becoming so real, they’re coming! We watched a short video produced for us by the Beijing Queer Chorus. Real people, saying hello to us. This makes it so much more real.

March 5, 2018
As Bob says, “The most important rehearsal of the term,” the Monday after retreat. Cementing the music in our brains. I’m so nervous about singing in Mandarin, especially singing “Never Ever.” How long have I been singing this song??? How many years, in how many venues, with how many different performers and audiences? I thought it was hard learning to sing baritone on GALA anthems I sang for years as an alto before my transition, but I am finding it’s a lot harder to sing an old familiar song in an unfamiliar language! And it’s THEIR language; will they be able to understand us at all???

March 10, 2018
There were maybe fifty chorus members at the house reception, along with all the hosts to meet their Chinese houseguests. Impromptu, when they started coming through the door, fresh from their bus ride from Seattle, we burst into applause, welcoming them from their long journey. The dream that started two years ago is finally a reality! They looked a bit stunned at their enthusiastic reception, but we just couldn’t help ourselves.
And really – what would have been more fitting? The Beijing Queer Chorus (BQC) first set foot in the United States in Denver at GALA Festival 2016. At that point, our goal of an exchange visit began taking shape. The Portland Gay Men’s Chorus (PGMC) has done several exchange concerts with other US-based [choruses] in the past. With BQC, however, PGMC has embarked on a historic undertaking: ours will be the first openly-LGBTQ+ chorus to perform in mainland China. I could wax eloquent about BQC’s week in Portland and our joint concert, but I’d rather share snippets of experience [from] the hosts and guests during that magic week last March: 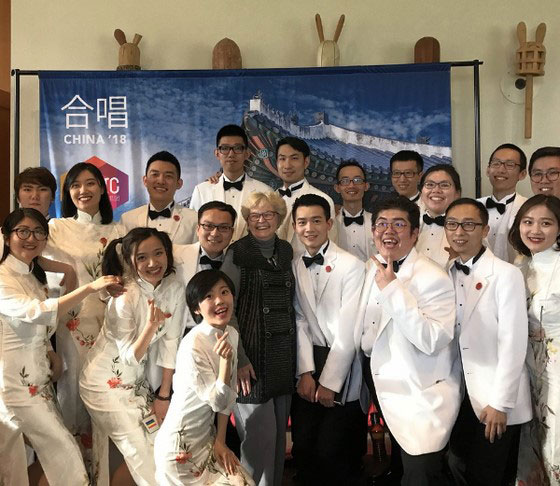 The core of the experience was how connected we became. We talked music, coming out, food, families and even politics. Their commitment to making the world better with music and by being out singers in the LGBTQ community was so strong. Sometimes we talked in the way younger women talk with older mentors about their lives, their families, their challenges. A few things that struck me as particularly endearing and sweet were:

When it was time to leave, gifts were exchanged, I drove them to the bus, and we all cried because we had connected at such a deep level; across generations, cultures, our
common struggles, our common joys, our excitement that BQC is leading the way for LGBTQ people in China. We hope to go to China with PGMC for their historic tour, and maybe we’ll see our young friends again in Beijing. But always we’ll be connected at the level of the heart, all our supposed different demographics is irrelevant. This was a time when we connected with music, laughter, the truth of this social justice, sharing and the moments the heart knows we’ve met true kin.”

After returning to China, here are some reflections BQC members shared about their trip to Portland:

The spirit of community enables people to create such great achievements. And it also helps when people [have] suffered from social problems. We believe it is community spirit that brings Beijing Queer Chorus to the US to carry out this friendly cultural exchange. We knew the love and support we received in the US was not just for us. We had the responsibility to help our people to see a different world. After going back to China, we held a sharing session with audiences from Chinese queer community on 24th March. And we are working on having more sharing sessions at universities in Beijing. [We] hope we could influence our younger generation just like we have learned from SMC, PGMC and PLC.”

One last note: emboldened by their trip to Portland, seeing the possibility of living authentically and unapologetically, two men of BQC announced their engagement after their return to Beijing. They plan to be married in Portland, date TBA.

Reid Vanderburgh
Reid Vanderburgh is a retired MFT, writer, educator and consultant who sings with the Portland Gay Men’s Chorus and serves on the board of Bridging Voices.He has published two books on gender and sexual identities.https://reidvanderburgh.com/