I was asked to write about inclusion. It is impossible to overstate the importance of understanding our inconvenient assumptions that keep us from involving men and women who are incarcerated in the arts as well as in our lives. I am who I am today because of this work. I know what the benefits have been for me and as I share some of the responses from the men and women inside I hope to illustrate there is no better population to include as we revamp our thinking about music education and prepare conductors to go out into the world.

Over the last 31 years I have been privileged to teach academic courses and to build choirs inside a number of prisons in southwestern and central Ohio.  In the early 1990s, when I was on the music faculty at Wilmington College, a Quaker school, the Dean of Correctional Education asked me to start a chorus as part of our Fine Arts curriculum at Warren Correctional Institution for men. In 1993 I founded UMOJA Men’s Chorus with seventeen singers and continued to conduct that choir until 2016.

People who are incarcerated must be included in our world of music making. Though these singers are imprisoned, they are creative human beings, with open hearts and minds receptive to learning, growing and changing. Working with these men and women has allowed me to challenge my stereotypes and assumptions about who is incarcerated. My singers inside would agree that the transformative power of music and choral communities encourages spiritual and emotional development, fosters artistic expression, and teaches how to build community and cooperation. 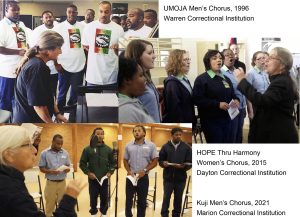 This work has been important to me in several ways including my self-interested desire to further my own education—about race, racism, poverty, mass incarceration, about the prison industrial complex that touches all of us, and about what happens to human beings in this devastating and singular culture of punishment our country has perfected.

I never thought I would say that some of my most profound musical experiences have happened inside prison walls. Over these many years I brought in everyone I knew — voice coaches, composers, musicologists, historians, hundreds of singers in other choruses I conduct, and as men and women have gotten out of prison, I have included these singers in my ensembles. The inclusion of returning citizens in my church choir and in my community choirs has enriched everyone. Cross cultural exchange happens and communities are built as musicians from the outside go inside prisons and when formerly incarcerated singers join choruses I conduct on the outside upon release. This is vital to our understanding of the resilience of imprisoned musicians and how the arts are the connector point to self -expression and to emotional healing.

When I began, I focused my repertoire selection primarily on music of African American composers and arrangers, and music from the African diaspora because the majority of singers who participated are African American. I brought in choral professionals and composers to teach their works. Soon we were singing compositions the men composed themselves. I was familiar with genres used by the men early on such as gospel, ballads, rhythm and blues, and other popular styles. Then my eyes were opened to Hip Hop and rap, adding to my appreciation and understanding of culture and tradition. We programmed our choral concerts with a theme we crafted together, but never would I have guessed that powerful story telling from the musical theatre repertory and extended, narrated choral works would capture the deepest engagement with my inside singers.

My appreciation for the oral/aural tradition expanded and also added to my awareness of change needed in our music education system.  My listening skills improved quantifiably as well as my appreciation of the power of a compositional process that allows marginalized and silenced voices to sound their truth. It made me take to heart the meaning of the Quincy Jones’ song….. “what good is a song if it doesn’t inspire, if it has no message to bring, if it cannot lift you higher…”

I’d like to share reflections written by women from MUSE, Cincinnati’s Women’s Choir’s Choir, a choir I founded in 1983.  Members of MUSE went inside Warren Correctional in 2010 and joined UMOJA as they recorded the African-American Spiritual, “Sometimes I Feel Like A Motherless Child,” for a projected CD.

The next section of this essay includes reflections and responses from men and women who are incarcerated as they reflected on three recent programs we’ve done to illustrate the power of inclusion when inside and outside singers collaborate. I introduce this section with words by Guy Banks from KUJI as we worked to craft a mission statement for the choir:

“The KUJI Men’s Chorus serves the inside and outside community through musical art. Our ideas of healthy community, freedom, unification, and spirituality are reflected through our music and personal relationships with one another.”

In 2017, my longtime tenor friend and voice professor, Dr. John Wright (Salisbury University) who has come into prison with me many times to work vocally with my various choirs, suggested that he bring six of his student voice majors from Salisbury to sing the lead parts of Les Miserables with UBUNTU and KUJI choirs singing the choruses at their respective institutions. Together we chose six songs the men would sing and John selected the necessary songs to tell the story in truncated form.

I prepared the choirs at London and Marion prior to John arriving with his students.  After six hours of rehearsal together in each prison, we performed our abridged version of Les Mis before large audiences of combined inside and outside attendees. Here are some reflections by choir members: 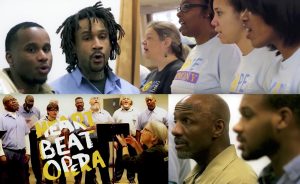 Perhaps the quintessential example of inclusion was the invitation extended to all three of my Ohio choruses as well as three other prison choruses from Kansas, Minnesota and Iowa, to sing the “The Prisoner’s Chorus” from Beethoven’s only opera Fidelio.

Heartbeat Opera in New York City, a small repertory opera company, is known for reshaping classical literature to engage contemporary issues. Fidelio, for example, was transformed and reimagined for the era of Black Lives Matter.  Directors Ethan Heard and Daniel Schlosberg came into the prisons, recorded, and videotaped rehearsals and stitched the material together. The video was then projected onto the back wall of the theatre during the live performance. “The most powerful scene was the prisoners’ chorus, which was performed by 100 incarcerated men and women and 70 volunteers from six prison choirs. They were seen on pre-recorded video as well as heard, and their amateur but committed music-making brought real life into the theatre.” The Wall Street Journal, May 7, 2018, by Heidi Waleson

When asked what it was like to learn the music in German, one choir member said: 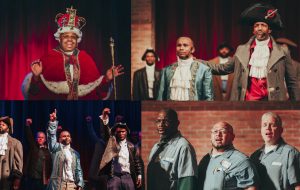 After performing Les Mis , the men in KUJI Men’s Chorus felt so good about their success, they became excited about the possibility of doing Hamilton… and it happened.

The men chose 23 of the 46 songs, the accompaniment was available on line. The singers more or less fell into or chose the roles they would play. Seven women from my choirs outside joined KUJI, three played major roles (Eliza, Angelica and Peggy) and the others added to the chorus.

This was one of the most life-giving, mind-expanding programs I have ever done. We performed four sold-out programs with 700 outside guests, including family members in November 2019.

After the performance, a selection of the KUJI and audience members wrote these reflections:

I believe in an expansive music education system that crosses imagined chasms to include musical artists inside as well as those who have been released.

I believe music is the currency of hope and resilience. In the carceral setting, this was my experience born out every rehearsal and every performance. In this dark, desolate, and isolating environment, inclusion is the means for a moment of transcendence and freedom. 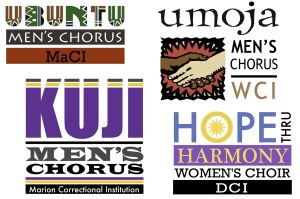