The Esoterics is a Seattle-based vocal ensemble that is dedicated to performing and perpetuating contemporary a cappella choral settings of poetry, philosophy, and spiritual writings from around the world. While cultivating artistic expression and cultural understanding among its singers and audience alike, The Esoterics aspires to reflect the beauty, power, and significance that are inherent in the music of our time. Now in its third decade, Seattle’s most innovative chorus has drawn local, national, and international praise for performing rarely-heard compositions of contemporary music for unaccompanied voices, for infusing elements of the literary, theatrical, and visual arts into the typical concert experience, and for inspiring and performing new a cappella choral settings of poetry, philosophy, and spiritual writings by composers around the world in myriad languages. In early 1992, Eric Banks brought together a group of singing friends to perform his Master’s and Doctoral recitals in Choral Studies at the University of Washington. After Banks’ recitals were completed, the group wanted to keep singing together, so Banks chose a name for his ensemble based on the Greek adjective – which describes a close-knit community and the secret knowledge that its members share.

Since incorporating with this name in 1993, The Esoterics has performed hundreds of concerts throughout the Pacific Northwest, has commissioned and premiered hundreds of new works for a cappella voices in dozens of languages, and has mastered many of the most virtuosic choral works of the last century in concerts described as “compelling,” “crafted,” “luxuriant,” “lyrical,” “sumptuous,” and “superb.” The Esoterics has released sixteen CD recordings – and has been honored as the only North American chorus invited to compete in the 2000 Cork International Choral Festival (Ireland), the 2001 Certamen Coral de Tolosa (Spain), and the 2006 Harald Andersén International Choir Competition in Helsinki (Finland). As well, The Esoterics has demonstrated its continuing commitment to choral education in becoming the only choral ensemble in Washington State that grants continuing-education credit to its members who also teach in the public schools. In recognition for its efforts in choral education and innovation, The Esoterics has been honored four times with the ASCAP and Chorus America national Award for the Adventurous Programming of Contemporary Music (in 2001, 2003, 2006, and 2008).

The Esoterics has been honored to receive grants from the arts commissions of Washington State, King County, and the City of Seattle, as well as funding from ArtsFund, Boeing, Expedia, Microsoft, the Seattle Foundation, the Aaron Copland Fund for Music, and the National Endowment for the Arts. The Esoterics is a proud member chorus of ACDA (the American Choral Directors Association), Chorus America, IFCM (the International Federation for Choral Music), and GALA (the Gay and Lesbian Association of Choruses). 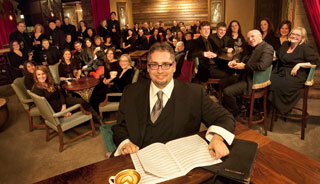 Always on the search for the next great choral masterpiece, The Esoterics inaugurated its annual choral composition competition, POLYPHONOS, in 2006. Through this competition, The Esoterics awards commissions to three composers each year — one young composer (under age 30), one national composer, and one international composer. Each winning composer is commissioned to compose a new choral work that will be premiered by the ensemble in the following year. For this commission, winning composer receives $1000 US plus airfare and accommodations to attend the Seattle premiere of their commissioned work. In 2016, the three winning POLYPHONOS composers will set verses by the literary icon, Oscar Wilde.

“The beauty of the evening broke my heart open and I was moved to tears several times. The poetry, the music, the compositions, and the soloists combined into a divine and ecstatic listening experience. I felt fully connected to something larger, to everyone in the room, to the depth and the yearnings of my own soul. Thank you for creating evenings like these here in Seattle. In this mechanized world, experiences like these, of poetry and song as they have been enchanted for millennia, are deep medicine at the same time as they are fine, fine art.” (from an audience member at a recent concert)