Phoenix Women’s Chorus is a feminist, lesbian choir located in Phoenix, Arizona. The organization exists “to increase lesbian visibility, to celebrate the accomplishments of women in music, and to passionately pursue artistic excellence.”

Phoenix Women’s Chorus serves as not only a performing arts choir, but also an advocate for social change as it relates to women and the Gay, Lesbian, Bisexual and Transgendered (GLBT) community. The chorus offers a safe and supportive environment for the GLBT community to support one another and educate the general public about what it means to be GLBT.

As part of our commitment to our local community, Phoenix Women’s Chorus performs four full-length concerts each year; in the fall and spring. In addition to preparing for and presenting concerts each year, Phoenix Women’s Chorus participates in a wide variety of community activities. These events include Arizona Central Pride Festivals, Rainbow Festivals, Phoenix Pride parades, AIDS Memorial services, annual dinners for Equality Arizona (formerly known as AHRF), WNBA Phoenix Mercury games, Caroling visits to the Phoenix Children’s Hospital and, since the landmark repeal of “Don’t Ask, Don’t Tell” in 2012, ceremonies at Luke Air Force Base.

The breadth and depth of talents and interests among our members has fueled our ability to extend our involvement beyond the boundaries of the Phoenix area. We have reached south to Tucson, and are actively planning performances in the Prescott and Flagstaff areas, as well. Phoenix Women’s Chorus is a vibrant member of the Gay and Lesbian Association of Choirs (GALA) and has performed on national and international stages, including San Jose, Montreal, and Denver. 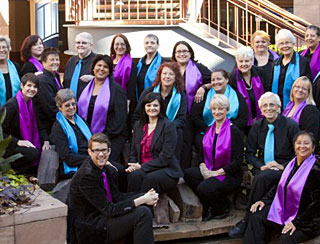 Phoenix Women’s Chorus is more than simply a choir. It is a wonderful group of women who support each other through life’s uncertainty, while working toward greater lesbian visibility within the community. The repertoire is as diverse as the women that make up this incredible organization. Each concert brings something new and exciting. The dedication of the staff, board and volunteers is evident in everything that this organization has and will continue to accomplish. Anyone who has ever been a part of this organization or has the privilege of seeing PWC perform is part of a family that compares to nothing else. The community has been lucky to have PWC for the past 20+ years, and I hope that we can add another 20 years to our legacy.
– Joanna Reihing, singer