The Orlando Gay Chorus (OGC) was founded on February 14, 1990 under the leadership of founding President David Schuler and founding Artistic Director Dr. Charles Callahan. Back in 1990, there were rumblings that there might be protestors outside, or even in the theater. Despite the anticipation, anxiety, and fear before the concert, the 39 founding members of the chorus stepped out on stage to “the most incredible wave of applause I can ever remember,” as one founding member recalls. Many of the chorus members sang that first concert with tears in their eyes and big grins on their faces…and they haven’t looked back since. A number of those founding members are still a vital part of the Orlando Gay Chorus family to this day. 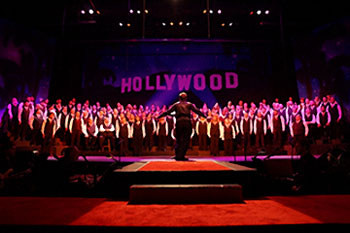 Twenty-four years later, now 150+ strong and comprised of lesbian, gay, bisexual, transgender, and straight individuals, the Chorus is thankful to be able to carry on its mission and vision. Their musical artistry speaks directly to their pride in themselves, and offers the world a chance to see beyond headlines and contentious social issues to build bridges of understanding and love.

Inspiring individuals, the community, and the world through excellence in musical entertainment.

Using music to change images and attitudes, build a stronger community, and make the world a better place!

To learn more about the Orlando Gay Chorus, visit their website. 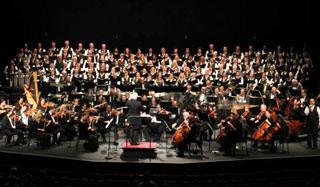 On October 12, 2013, the Orlando Gay Chorus was honored to perform with the Orlando Philharmonic Orchestra, for the first time, in An American Salute at the Bob Carr Performing Arts Centre, under the direction of Maestro Albert George Schram. 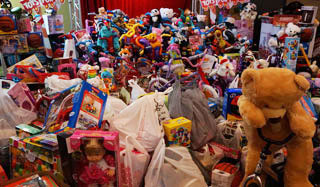 In addition to their music, the Orlando Gay Chorus is known for its humanitarian efforts throughout the year. Every November, each of the five sections of the Chorus partners with the Children’s Home Society (CHS) of Central Florida to sponsor a family in need, providing “Big Bulging Baskets” of Thanksgiving Day foods and supplies.

For the past 23 years, the Orlando Gay Chorus has hosted the longest continuous US Marine Corps Reserve Toys for Tots campaign in Central Florida. Bass Section member Fred Berliner started the OGC Toys for Tots campaign back when things were less equal and they weren’t even sure the toys collected by an LGBT organization would be distributed to children.

Five years ago, the Chorus made it a special mission to add new bicycles to the campaign. That year, 24 bikes were donated by the Chorus and patrons of OGC. Each year the bike drive has been more and more successful. This year, through the generous gifts of members and patrons, OGC was able to donate 120 bicycles and filled two 50-foot moving vans with bikes and toys for the children of Central Florida!

…”The heart of the program was a first-time collaboration between the Philharmonic and the Orlando Gay Chorus, led by artistic director Jim Brown, and this choral segment provided the most thrilling moments.”…”the chorus burst forth with rousing force. The highest sopranos floated over the lower voices, never shrill, with the harmonies well-blended and clear.”…”Battle Hymn of the Republic was a shining example of the best in choral singing: In changing rhythms, dynamics and intensity, the chorus communicated every nuance of the lyrics as the song moves from awe to hope to righteous determination. That’s music worth saluting.”