One Voice Mixed Chorus unites gay, lesbian, bisexual, transgender people and straight allies to build community and create social change by raising our voices in song. One Voice is known for its musical excellence, diverse programming, and deep commitment to community outreach. The 120 singing members range from ages 17 to 75, and the “Fifth Section” boasts more than 50 non-singing volunteers. Watch video vignettes from We Are One Voice – 25th Anniversary Concert.

Whether performing in schools, at community events, or on stage for marquee concerts, One Voice inspires transformation through passionate, vibrant, and creative performances. The award-winning chorus, under the direction of Artistic Director Jane Ramseyer Miller, has performed for thousands of people throughout the Twin Cities, Greater Minnesota and beyond and is described by Chorus America as “one of the region’s best ensembles.”

OUT in Our Schools

Over 12 years ago, One Voice Mixed Chorus created OUT in our Schools, a program of free in-school concerts that reach over 1,500 students each year. Approximately 60 One Voice singers take vacation time from work each spring to sing in schools. Several years ago One Voice discovered that the quality of engagement was significantly higher when the chorus sang with the students rather than for them. Now Artistic Director, Jane Ramseyer Miller, rehearses with students in each school in advance and these students perform with One Voice for their student body. Watch One Voice school concerts via video.

Transforming our Communities One Voice at a Time

In 2013 One Voice received a Minnesota State Arts Board Touring grant to perform Minnesota Voices in three northern Minnesota communities: Bemidji, Big Fork and Brainerd. In each city, One Voice is partnering with a community chorus that will join One Voice on stage. In addition, the chorus is collaborating with local arts organizations to produce and sponsor each concert, host a community potluck and create opportunities for conversation and interaction. While this kind of outreach work demands significant planning and creativity, the benefits in terms of community engagement and audience development are enormous.

Listen to audio recordings for Minnesota Voices or order a One Voice recording.

Listen to a sample 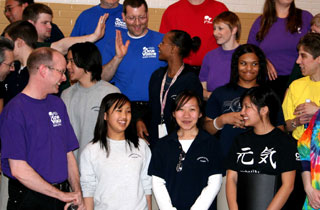 “Our concert with One Voice provided our students a real life opportunity to take a stand for justice. We teach peace and ethics every day. The collaboration gave our students a unique opportunity to walk the talk. Having raised a son who is gay, I was fully aware of the collaboration’s tremendous potential for good in the lives of young people. ” 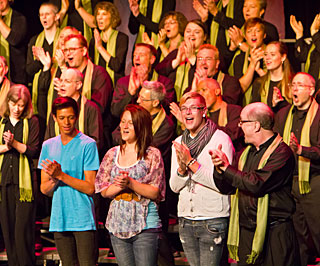 “I saw your bus pull in and felt overwhelming excitement Then, when your singing began, it called up in me one of the deepest joys and a most powerful connection to human consciousness. Thank you for coming out to Greater Minnesota – for being seekers of change and creators of awareness. I am a grateful, re-energized PFLAG mom on the prairies and I plan to see you perform again. ”

–A PFLAG mom from Marshall, MN