The Gay Men’s Chorus of Washington, DC (GMCW), is one of the oldest LGBT choral organizations in the United States. With more than 300 singing members, it is also one of the largest. The chorus’ mission is that it “delights audiences and champions gay equality with robust artistry, fun, and surprise.”

Earlier this month, 21 singers of the GMCW travelled to Cuba for a 9-concert tour to promote LGBTQ equality and social justice. They were the first American gay chorus to travel to the island nation since relations with the U.S. have been restored. They performed for community centers, government officials, children’s dance companies, and senior citizens in and around Havana. The reception was overwhelmingly positive as the universal language of music broke down barriers and opened hearts and minds, yielding powerful conversations between the singers and the local residents about social justice and equality. 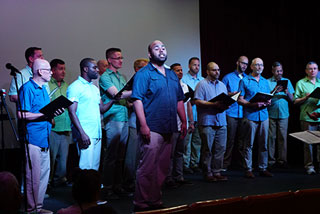 “Arts is the greatest path to the truth.”
– Mariela Castro, after she heard us sing