In 1981, a time when the gay-rights movement was just gaining momentum, founding artistic director Jeffrey McIntyre and 45 talented and brave singers came together to form something quite new, especially in the South — a singing group where members would be proud not only of the quality of what they were singing, but of the positive image and message they were portraying.

For over a quarter of a century, the Atlanta Gay Men’s Chorus has been a voice for diversity and inclusiveness, presenting high-quality musical entertainment that positively represents the gay community while serving the entire community at large.

Through the years, the AGMC’s volunteer members have been privileged to share the stage with such notables as Leslie Jordan, former poet laureate Maya Angelou, The Atlanta Opera, the Atlanta Symphony Orchestra, the Atlanta Ballet, Turtle Creek Chorale, the International Gay Men’s Chorus of Paris, and many more. The AGMC and its select ensemble, Panache, have been proud to perform at benefits for victims of 9/11 and Hurricane Katrina, for charitable organizations such as the Elton John AIDS Foundation, the Metropolitan Atlanta Community Food Bank, and AIDS Athens, and for community service events such as First Night Atlanta, AIDS Walk Atlanta, the Human Rights Campaign Annual Dinner, Toys for Tots and The Toy Party.

Listen to a sample 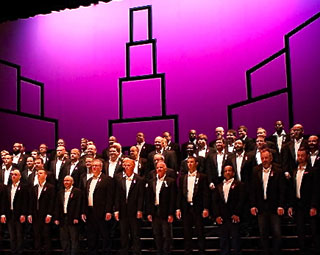 The Chorus has frequently appeared at premier performing arts venues such as the Fabulous Fox Theatre, Atlanta Symphony Hall, the Cathedral of St. Philip, the Robert Ferst Center for the Performing Arts, the Atlanta Civic Center, Emory University, Agnes Scott College and — as part of the Chorus’ 2007-08 season — the Alliance Theatre of the Woodruff Arts Center and the world-class Cobb Energy Performing Arts Centre during the Centre’s inaugural year.

One of the world’s longest-running gay choruses, the AGMC has a well-earned reputation for musical leadership and excellence. It is a member of the international Gay and Lesbian Association of Choruses (GALA), and it actively participates in collaborative performances and educational efforts with their member choruses worldwide. The AGMC is also a member of Chorus America, an organization dedicated to the expansion of the choral movement in North America.