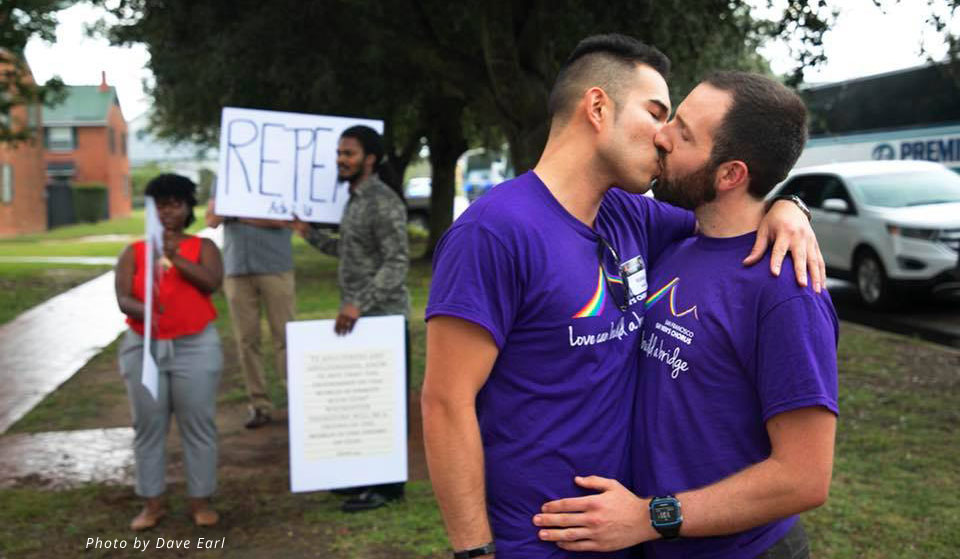 Singing for Our Lives

The titular phrase is near and dear to many, if not all, of us. Holly Near penned a song by this name while on her way to the candlelight vigil for Harvey Milk in November, 1978. It was performed that night by thousands, including the 4-week old San Francisco Gay Men’s Chorus.

Every time a GALA chorus takes the stage, be it large or small, we are doing just that – singing for our lives. A tipping point for SFGMC happened one year ago, the day after the November election. We knew it was our time to take our voices to join with our friends in the red South. Very simply, we wanted to encourage our LGBTQ brothers and sisters, to help them make some noise, and to help with some resources as well.

We named the project the Lavender Pen Tour after the lavender pen given by Harvey Milk, our gay patron saint, to Mayor George Moscone to sign San Francisco’s first Gay Civil Rights Bill. Harvey’s message, “You gotta give ‘em hope” resonated for us loud and clear, and this trip actually did give us hope.

Armed with a brand new arrangement of “Singing For Our Lives,” we hit the road with the Oakland Interfaith Gospel Choir. Nearly 300 people decided to give their own money, energy and talent, along with their vacation time, to make this trip. Together, we stepped out on faith and to make a difference in our country.

Once we made the decision to tour, our first contacts were to our sibling GALA Choruses in and around the cities we hoped to visit. Of course, they became the backbone of our marketing and outreach in each city. There was no GALA chorus in Mississippi (yet), so we invited the New Orleans Gay Men’s Chorus to join us in Mississippi. As if making a journey of this size were not difficult enough, we were accompanied on our departure by Hurricane Nate! NOGMC had to cancel as New Orleans was being evacuated, a situation that actually fit one of the pieces we sang — the brand new Andrew Lippa song “Dance with the Storm.”

The sheer magnitude of the undertaking was staggering, tallying almost 300 travelers in 6 buses, plus 3 vans and security vehicles; we made almost 30 appearances, sang to thousands of people across five states and raised tens of thousands of dollars which we left in each city to help them continue the amazing work they are doing. There were five full concerts, plus interfaith services in churches at each stop, appearances at universities and seminars given by experts among our membership on PrEP, transgender and coming out issues. We held “World Cafés” where leaders of the local community could come together and discuss how they could advance their work more effectively.

The seven-day trip was absolutely crammed with activities. It wasn’t all rainbows and unicorns, of course, and exhaustion doesn’t adequately describe our state of mind, but the singers became bionic and just kept going. There were protests along the way. We had abusive phone messages here in our offices and in the cities we visited. There were e-mail threats and a few tense moments, most notably with one venue being swept (not with a broom) between our tech rehearsal and performance. Those incidents, however, pale in comparison to the rousing and heartfelt welcome from the majority and the tour concluded without any major trouble. The months of detailed planning paid off.

There is no way to share every moment, and every member has his/her own highlight reel, but I would love to give you a few of my personal highlights – things you didn’t read in the press releases!

Standing on the steps of the Mississippi State Capitol in the sweltering southern sun (even in October). It is only two days after the announcement that HB1523 would become law. We began our tour raising our voices in protest of discrimination however and wherever is still exists. Protesting one of the nation’s worst discriminatory laws in decades is why we came and why we named the tour Lavender Pen. 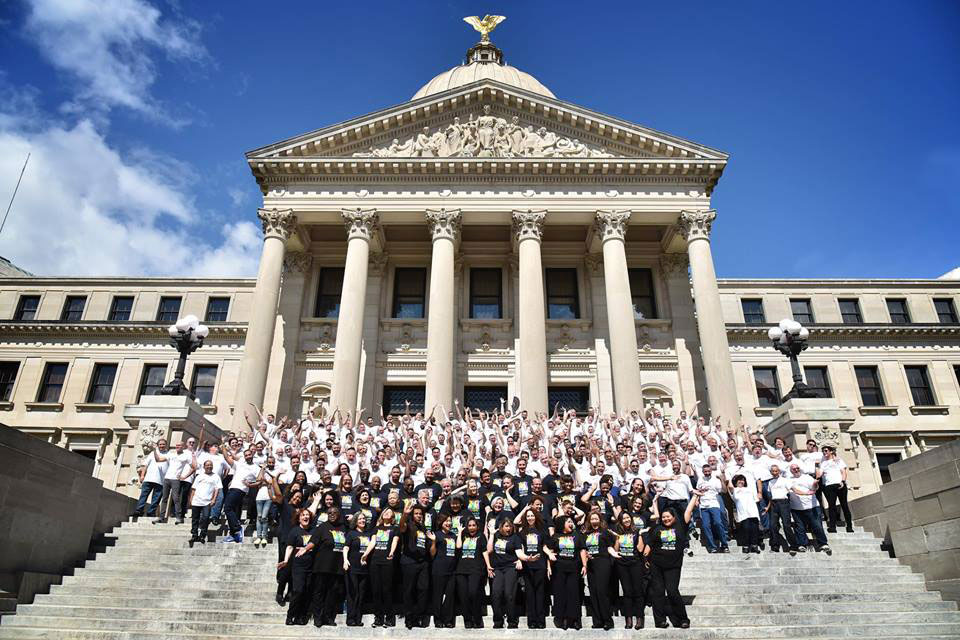 We arrived in Selma with full police escort, driving through the crumbling town, through the same projects that protected Brown Chapel in the early 60’s. We walked past protesters into the historic church, knowing that we were entering a sacred space. We listened to speakers who were there in the months leading up to “Bloody Sunday” in 1965. We sat in the pews where the courageous men and women literally planned a revolution. We sang “We Shall Overcome,” which will never again be as powerful for us as it was in that space. We then moved to the Edmund Pettus bridge for our own Freedom March – accompanied by several residents who had actually marched with Martin Luther King – and we sang “Love Can Build A Bridge.” It is not an exaggeration to say we were changed by this day.

Did we have any fun? Riding on busses for 8 days gave us a lot of “share time,” and being resourceful gays, this time was not wasted. One of the highlights was Bus Aisle Drag Karaoke! Oh, yes. Singers had to dress in whatever would fit in their small carry-on bag – the very definition of booger drag! (Photo of drag queen)

One of the most special highlights happened between Alabama and Tennessee, when all 6 buses stopped at the big “Welcome to Tennessee” Information Center and Rest Stop. I’m not sure we were all that welcome, but it sure was fun watching the reactions! Oh, and not to ignore the fabulous food: fried chicken, fried okra, fried green tomatoes, and the peach cobbler and pecan pie! 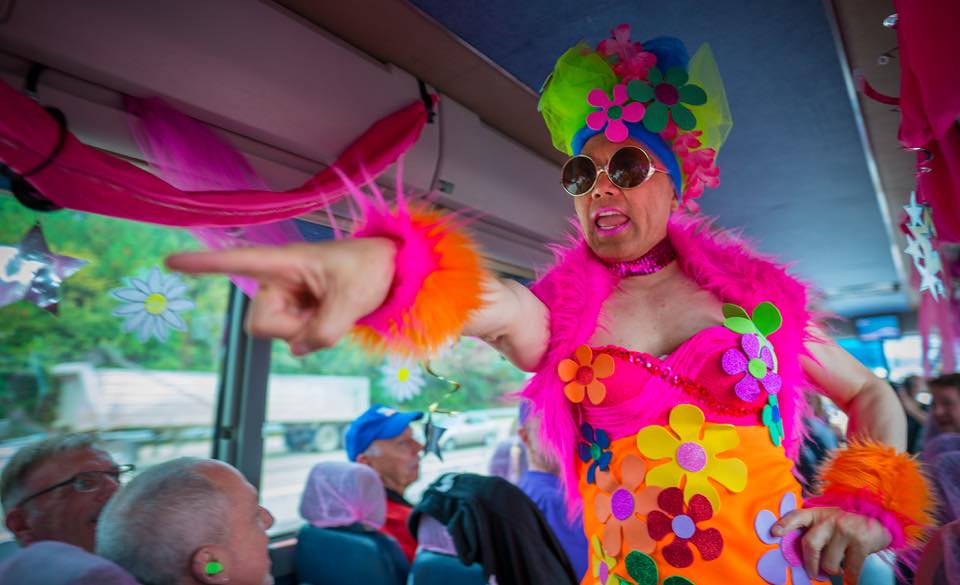 A few months ago, we made contact with the gorgeous and huge First Baptist Church of Greenville, South Carolina, where we were invited to give a concert there. We didn’t believe it, but went with it, and, it happened. This was one of the most anticipated days of the entire trip – right up there with Day 2 in Selma. Once they publicized the concert, the church received incredible hate messages from near and far. The pastor, Dr. Jim Dant, and the congregation stood firm.

After our afternoon rehearsal, we gathered for a meal before moving back to the sanctuary for the concert. We had no idea how many people would attend. As we entered the back of the auditorium, we were blown away to see the church was packed – standing room only, with folks bringing in overflow chairs. As the singers began down the aisles toward the altar to sing, the audience literally jumped to its feet as one and applauded until the last singer reached the stage. We wept at this. Two things that do not normally go together in nature: gays and Southern Baptists. And yet, here we were. They loved the concert. The impact of that evening will last in our hearts and in that community and beyond for a very long time.

We shed a lot of tears on this tour – as did our audiences. Every time Oakland Interfaith Gospel Choir and SFGMC joined to sing “There Are No Orphans of God” we were moved. No matter what a singer or listener might believe about Deity, we all realized in those moments that we were not alone. “There are no strangers. There are no outcasts. There are no orphans of God.”

The tour was so much more than music and sharing, drag and pie, busses and motels. We left hoping to encourage our LGBTQ brothers, sisters and allies, to give them a musical vitamin shot with our voices and the funds raised for them. In the end, though, we brought home many more gifts than we left behind. I think I can speak for the entire group when I say that for most of us, our West Coast perception of “The South” was altered. Those we met along the way were wonderfully warm, accepting and beyond eager to hear our message. It was clear that things are tough for our red state LGBTQ brothers and sisters, but the good news is that they have allies. In the south, it all begins in the churches and they are beginning to turn the tide with support. It was amazing to see and it gave us hope!

It is very exciting to see other GALA Choruses all over the country reaching out to those in areas that do not have choruses. We were not the first GALA Chorus to sing in the south, and we won’t be the last. I’m just proud to be a part of an organization that recognizes the need for raised voices and that is working hard to sing for our collective lives.

One last thing about that teaser earlier regarding Mississippi not having an LGBTQ chorus? Well, they soon will! Voices of Mississippi was a concept before the tour, and after SFGMC’s visit, the organizers put it on the fast track, started rehearsals and have now joined GALA Choruses! They’ll need all the support and well wishes we can send.

The repercussions of this tour will last lifetimes. Thank you for your interest, support and encouragement.