Spanish
MENU
GALA Choruses Blog » Featured » Not About Me 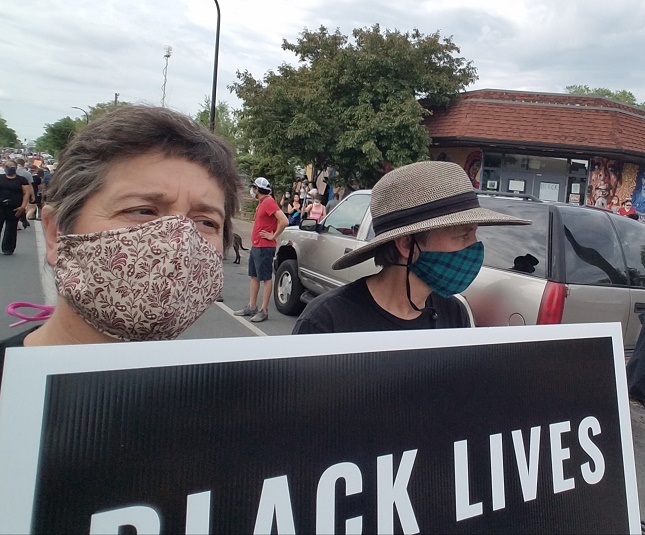 I live 5 blocks from the intersection where George Floyd was killed. In the days and weeks after his death our neighborhood was transformed into what I can only imagine must feel like a war zone. Helicopters and sirens circled 24-7, convoys of camouflaged national guard trucks patrolled our streets, curfews were set, and white nationalists in unlicensed trucks emerged to stir up violence and trouble.

Neighbors gathered in the park organized by a group of black, brown, Indigenous, and queer organizers. We established all-night patrols, put our garbage cans inside so they couldn’t be filled with fuel and lit, packed a bag in case our house caught fire, and established a way to communicate with our neighbors if anyone needed help.  In the daytime we marched and protested.

Friends texted asking about our safety. Each morning I called my worried parents to let them know I was OK, that our house had not burned down even though the smell of smoke was thick most nights. I posted what was happening each day on Facebook, that we were safe, that we were scared, how we were organizing as a neighborhood.

After the first week I was in the middle of writing a Facebook post to let everyone know how I was doing and I suddenly realized – this was not about ME.  The fear that I was feeling each day was not actually central to the movement happening around me.  I’m white and relatively safe. If my house burns down, I have the means to move on and find another place to live.

In that moment, I had a tiny glimpse of the fear that black men feel all the time. This “war zone” is experienced by children, elders and everyone in between all over the world and some for their entire lives. This short moment of fear in my relatively safe life was not what people needed to see or hear from me.

I erased my post and started again. I wrote about the incredible community meetings in the park led by Black, Indigenous, People of Color (BIPOC) and queer folks. I posted the day that our Minneapolis City Council, including two trans POC, announced they were going to completely dismantle the police system in Minneapolis. I posted photos of the stunning graffiti art; the protests and marches every day that were filled with people of every color, age and gender; the peaceful George Floyd memorial site filled with art, flowers and new vegetable gardens planted right in the street.  Each day I asked myself, is my response, text or post focused on the leaders and heart of this incredible movement for change or am I simply drawing attention to myself?

When I was a young 20-something I was working as a community organizer for Habitat for Humanity. My job was to build a new neighborhood board in North Minneapolis, a predominantly black neighborhood. I was a very naïve, well-intentioned white person and completely unprepared for this work. I was 20 minutes over coffee with an elder black pastor trying to recruit him to the neighborhood Habitat board when he looked at me and said, “why do you white people always try to get us to join your organizations? Why don’t you ever participate in our efforts.” His words turned my well-intentioned world upside down.

It has been more than 35 years since that dialog and I remember it word for word. It has shaped my work, my relationships and how I collaborate with community partners as a conductor and musician. And still, I continue to make mistakes, continue to learn. I understand that addressing my own white privilege is a commitment that I make for my entire lifetime, and that I have a responsibility as a white person to dismantle the racism that my race has created. As Catherine Pugh challenges, this is a white person’s mess and we need to clean it up.

For its first 20 years, my chorus and my programming was focused on queer rights, trans and bi visibility, celebrating our community and culture. But when gay marriage passed in 2013, I decided it was time to move behind the needs of the queer community and made a commitment to commission and program music that honored BIPOC artists.  When the current President was elected I renewed this commitment and made a broader effort at hiring queer and BIPOC artists as musicians, composers, guest artists, and ASL interpreters. I sought out ways to support and partner with BIPOC lead organizations in the Twin Cities.

In May, when my chorus board of directors issued a statement in support of George Floyd and Black Lives Matter, I told them I could no longer continue to program music by BIPOC or bring in BIPOC as guest artists unless the board was ready to put teeth behind their statement and support our programming with internal education, training, conversation, and action. They agreed, and during this fall of Covid quarantine we are beginning this work in partnership with The Change Network and with resources like the New Harmony workbook. I don’t know where these conversations will take us but I do understand that this work will last long beyond the time that this virus has given us.

In the meantime, I am grateful to be living in south Minneapolis in a time where everything is evolving by the day. I have hope that our nation is waking up and that real change may actually be possible. I remind myself every day that the world is bigger than my own experience. I look for spaces to listen and participate in BIPOC led efforts.

The Black Voices Matter pledge for choral artists is a great start. I have posted it in my workspace as a daily reminder that this movement is not about me, but I have an important role to play in supporting the leaders who are making it happen.

Jane Ramseyer Miller
Jane Ramseyer Miller serves as Artistic Director for GALA Choruses and is responsible for the artistic aspects of GALA events, resources and Festivals. She is also in her 20th year as Artistic Director for One Voice Mixed Chorus in St. Paul, Minnesota. She holds a Masters of Music in Choral Conducting from the University of Minnesota and a BA in Psychology from the University of Waterloo in Ontario, Canada - and uses both degrees in her work every day! In 2008 she received the GALA Choruses Legacy Award for her conducting, innovative programming and commitment to community outreach. In 2010 she was awarded the ACDA VocalEssence Award for Creative Programming and the ACDA Minnesota Advocate for Choral Excellence (ACE) Award. Miller also is committed to creative choral collaborations and recently Jewish Pride awarded her their Tikkun olam "Healing the World Award" for a project exploring the music of GLBT and Jewish music of the Holocaust.