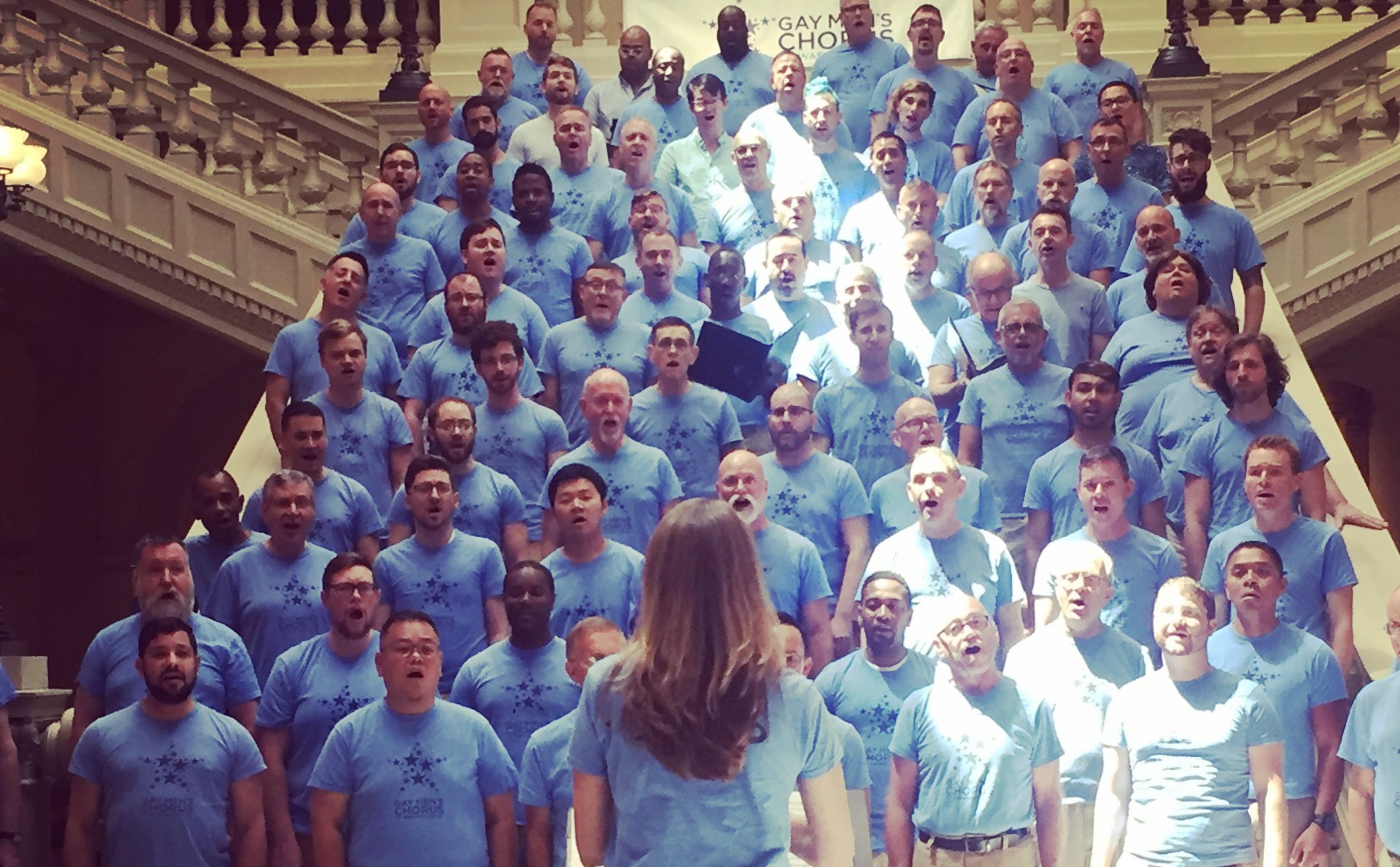 Dispatches from the Road 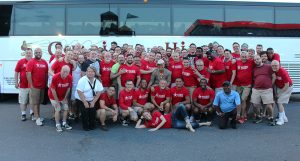 I dropped off my dog Daphne. I picked up coffee. I made my way to our departure point. As I turned the corner, I saw a singer walking, no, sashaying toward the bus. I stopped in my tracks and my eyes welled with tears. To me, the vision represents how vital it is for The Gay Men’s Chorus of Washington, D.C. (GMCW) to head out on our Southern Equality Tour.

You see, “sashaying” is an action one only feels truly comfortable doing when freedom and equality are present. It is a symbol of comfort, of being in a place and time where one can be themselves. In the northwest quadrant of Washington, D.C., it’s a regular occurrence. GMCW is bringing our voice of equality to the South to change hearts and minds, not only about sashaying, but about the larger issue of respecting people for who they are, as they come.

It’s a terrible thing to not be able to walk in the manner most comfortable to oneself. It’s worse to worry each day over losing one’s job because of your core identity. Worst of all is living in fear of one’s life. We head to the South to raise our voice and essential funds for local Queer centers, churches, and organizations. To ease some of the fear and anxiety many individuals feel about not only their rights, but about being their true and open selves. To offer support to those who feel lost.

We arrived at Binkley Baptist Church in Chapel Hill, N.C. for our first performance, an institution with a longstanding guiding principle of inclusiveness. Without time for a warm-up, we entered the space singing “Seasons of Love” (you know, that song from Rent). The audience immediately showed their warmth and love, not even allowing us to get through the door before bursting into applause. It was a sweetly surreal moment – we’re really doing this; this is really happening. After the performance, as we quickly made our way back to the bus, words such as phenomenal, wonderful, beautiful, awesome, and thank you rang in our ears.

We continued to Columbia, S.C.’s Reformation Lutheran Church. The church’s tagline is “all are invited and welcomed.” The church, led by Pastor Tim Bupp, goes beyond welcoming those who come through its doors and actively invites those of any community to join. The performance was a benefit for the Harriet Hancock LGBT Center. Ms. Hancock, who many consider the mother of South Carolina Pride was present, beaming that our organizations would work together in such a way. But the collaborative nature of the evening didn’t end there – we were lucky enough to be joined by one of the newest GALA choruses, Midlands Men’s Chorus (MMC). In an email the following morning, MMC Artistic Director Gerald Gurss wrote, “MMC is on fire after last night. So thankful to share the evening with you!” The feeling was more than mutual and we went to bed that night with our own warm fire of justice in our hearts.

The buses rolled out early the next morning bound for the Georgia State Capitol Building. We walked into the resplendent structure and assembled ourselves on the South Wing stairs. This performance came at the invitation of LGBTQ rights activist and State Representative Karla Drenner. Ms. Drenner is the first-ever openly gay member in the Georgia General Assembly and spoke to us candidly about the state of the country, in her words, “a mess.” But she then went on to say what we need to fix it is more love. And that our voices were an outpouring of love.

The space was glorious to sing in, our voice for equality resounded on the marble and the columns seemed to shake with the sound of progress. While we were not the first LGBTQ chorus to sing on those steps, the very thought of any such group singing there has gone from impossible to improbable to laughable to (relatively) common practice. As we left, Representative Drenner said, “I recorded this so that when I’m 90 years old I can look back and say, ‘yeah, we did good work.’”

To many in the chorus, this performance was particularly meaningful, especially to a few native Georgians. We stand tall on the shoulders of those who came before us. We carried them with us as the resonance of our voice raised the call for inclusion, settling back then to stoic silence.

The locals led us to Sweet Auburn Curb Market for lunch. And for good reason. We found soul food and BBQ and cold Coca-Colas. After (most) of us had finished our meals, Thea led us in “Make Them Hear You,” a song from Ragtime that has become GMCW’s anthem. Smart phones were all around us capturing the impromptu moment. When we finished, a woman handing out popcorn samples seemed to explode with love for us. She pleaded with us to sing again on the other side of the market, then shepherded us over to a place of wonder and magic: Miss D’s New Orleans Style Candy. We sang and Miss D herself made a heart out of her fingers and thumbs. She then passed around warm pralines that were made with much, much love. 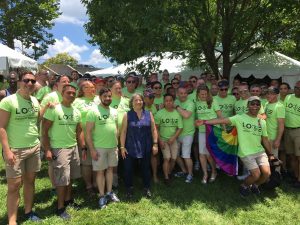 All was right in the world as we got back on the bus heading to our next stop, Birmingham, AL. Due to the time change, we gained an hour and had a moment to head to the hotel to take a swim and reflect on our progress thus far. We then got back on the buses and headed to the Unitarian Universalist Church of Birmingham. They greeted us with warmth and we warmed up with our collaborators for the evening: The Steel City Men’s Chorus, under the direction of Stephen Morros. We had only a moment to meet them before heading upstairs, but oh what a beautiful moment it was. We entered the performance space, filled with a gracious and appreciative crowd and shared some fine selections, culminating in another rafter-shaking rendition of “Make Them Hear You.” The audience was on their feet several times throughout the evening and the reception afterward was a much-appreciated chance to meet our fellow brothers in song and supporters.

I really didn’t know what to expect in the South. We considered hiring security. We worried that the wrong people might hear of where we were traveling. What we are finding are open arms and a genuine desire to hear us and interact with us. While we are lucky, having the opportunity to curate our tour, I wonder if we sometimes fall into the same trap of stereotyping the South as a land of inequality. When you see the faces of and talk to the people we’ve met, it seems like a hotter and less densely populated version of D.C.

But then one remembers that there are still discriminatory laws on the books, near-constant hate group chatter, and staggering rates of LGBTQ youth suicide.

Much has been accomplished. Much is broken. We raise our voice for justice, dignity, inclusion, and equality for all. We move the needle forward, sashaying as we choose.

Justin Fyala
Justin began as Executive Director for the Gay Men’s Chorus of Washington, D.C. in August 2016. Prior to this, Justin led the Windy City Gay Chorus and Treble Quire and the Youth Choral Theater of Chicago, focusing on development and organizational growth and served as President of the Chicago Fringe Festival Board of Directors. Justin holds a Masters in Arts Management from Carnegie Mellon University, studied Voice at the University of North Texas, and has a Bachelors in Choral Music Education from the Pennsylvania State University. He has previously worked for the artistic and operations departments of the Pittsburgh Opera, Aspen Music Festival, Bella Voce, Dallas Opera, John F. Kennedy Center for the Performing Arts, American Institute of Musical Study, and the State College Centre for the Performing Arts as well as the vocal division of IMG Artists. Justin has worked as a professional stage manager, vocal coach, and caption engineer, has taught collegiate voice and choir and high school music and drama, and regularly serves as an adjudicator for domestic and international music competitions.