Spanish
MENU
GALA Choruses Blog » Featured » Cathy Roma: I Am Because We Are, Part 3 – Full Coalition 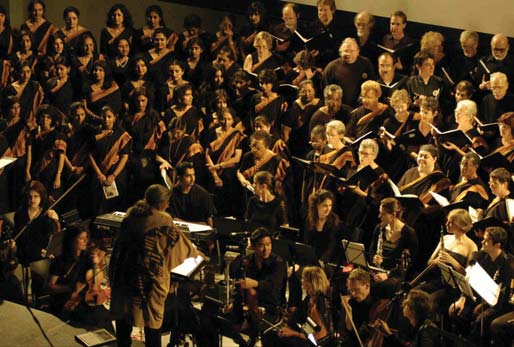 Cathy Roma: I Am Because We Are, Part 3 – Full Coalition

(above) Shanti: Journey of Peace is premiered by 150 singers with Eastern and Western instrumentalists in the University of Cincinnati’s Great Hall, 2004.

Finally, I have found means of using choral performance to unite singers and audience members of any gender and any background in events that breach the segregations typical of our cities.

While I was teaching at Abington Friends School in Philadelphia in the 1970s, momentum was building to designate a national holiday for Dr. Martin Luther King’s birthday. When my student Jason Walker told me that his father, Charles, had composed a work titled Requiem for Brother Martin, I knew we had the perfect vehicle for bringing inner-city and Quaker school students together. In collaboration with school conductors from a variety of neighborhoods, we amassed a choir of over one hundred singers that constituted the most diverse group any of the young musicians had ever joined. Our instrumentalists came from the Overbrook School, where my colleague George Allen directed students of color in an outstanding orchestral program. We gave our performance at Bright Hope Baptist Church in North Philadelphia. Our musicians became informed and passionate ambassadors for the effort to designate the January 15th national holiday.

By the time I finished my doctorate in the 1980s, I was settled in Cincinnati and aware of knowing only a rarefied segment of the larger community. So I joined the Martin Luther King Coalition, a multicultural organization under the leadership of African American women and men dedicated to preserving the legacy of Dr. King—which included sponsoring public celebrations of the newly declared national holiday. Religious members of the coalition included Jews, Muslims, Catholics, mainstream Protestants, Quakers, and Bahá’ís. Representatives of the city’s institutions came from City Hall, the public library, local union shops, and more. With a MUSE friend, I volunteered to organize the music for the upcoming citywide King program. From the seed of that idea, I found myself forming the Martin Luther King Chorale, which for twenty-two years I co-directed with mentor, friend, inspirational minister, and virtuoso gospel musician Bishop Todd Emerson O’Neal.

Starting with fifty-seven singers rehearsing at Zion Baptist Church in Avondale, the group steadily grew to over 150 members diverse in age, race, ethnicity, sexual orientation, and religious belief. We gathered each October to begin preparations for the next year’s King Day celebration. Our repertoire drew from the same historical and living sources of black American musical creativity already highlighted in this essay. I continually researched and pursued music written for King programs nationwide and for music of relevance to our city’s current climate of race relations, justice, and peacemaking. We answered invitations to perform at churches and schools during Black History Month, at our city’s annual Emancipation Proclamation Day celebration, for Race Relations Day, and in a ceremony convened by the City Council after removal of a cross the KKK had erected in Fountain Square. When we sang for the groundbreaking and then the opening of the National Underground Railroad Freedom Center (2002, 2004), our numbers topped five hundred.

My years in Cincinnati also found me directing the choir of Saint John’s Unitarian Universalist Church. In elevating the essentially interfaith and intersectional UU liturgy, I was able to use creative programming to unite disparate communities and to encourage meditation on humanitarian crises. We collaborated with musicians from the Berklee School in works by Harlem Renaissance jazz pianist Mary Lou Williams and with Malcolm Dalglish in a Solstice service featuring his folk-inspired choral works. In the fall after the US invasion of Iraq, we presented Vaughan Williams’s Dona nobis pacem. After Hurricane Katrina (and our church’s partnership with the African American congregation of New Prospect Baptist Church in bringing material aid directly to devastated communities), I designed a Sunday choral service around the music of New Orleans to honor the loss of so much of that music in the hurricane.

To extend the unifying cultural reach of the Saint John’s choir and the King Chorale, I brought both groups together into collaborative projects with Dr. Kanniks Kannikeswaran and his Greater Cincinnati Indian Community Choir. We mounted The Blue Jewel (1996) and Shanti: A Journey of Peace (2004)—singing in English, Sanskrit, and Tamil and performing with combined Western and East Asian classical instrumentalists. With rehearsals held at Saint John’s, our church repeatedly filled with singers and their family members from Cincinnati’s Indian community. We all sang together, ate together, and learned about one another’s beliefs and customs.

My latest project is the World House Choir, which I founded in 2012. Our mission is: to perform music that motivates and inspires our communities toward justice, diversity, and equality as we strive for peace and build our web of mutuality. With over one hundred members from cities all over Southwest Ohio, we are preparing performances of Steve Milloy’s narrated song cycle Bayard Rustin: The Man Behind the Dream to be given in Yellow Springs and Dayton and at Bishop Todd O’Neal’s church in Cincinnati.

Conclusion
Identity. Community. Relationships. Opening up the spaces. Filling in the silences. In arguing for the social justice potential of our choral practice, I return to the thoughts of Nicola LeFanu on sexism in music, paraphrased to apply more generally:

I believe, though I don’t have the vocabulary to speak of it, that through the arts, and most particularly through music, we reflect not only the structure of the world as it is, but also the world as it might be. I believe, with Margaret Mead, that any art is much richer, much stronger, if it is practiced by (all sectors of the populace). If music has anything to offer this destructive, divided society of ours, won’t it need to spring from both men and women (and from people of all racial and cultural backgrounds), rather than continue to reflect (our society’s inequitable divisions) back at itself? A musical culture of breadth and diversity: that would seem to be a natural goal for all of us (1).

My contributions to this goal include having commissioned over 150 original and arranged works for women’s voices—most importantly from a culturally diverse array of women composers. But I still find that women’s choirs and women’s repertoire remain at the bottom of the hierarchy. Should we be outraged when we discover that of all the pieces programmed at the 2017 ACDA National Conference, only 6 percent were composed by women (2)? I still find that we choral musicians are quite culturally segregated and that few of us are willing to put in the time and work that changing this requires. A choir with people from all economic backgrounds who are racially diverse, whose beliefs span the spectrum of world faiths and no faith… that is the choir I want to sing in, the world I want to live in. 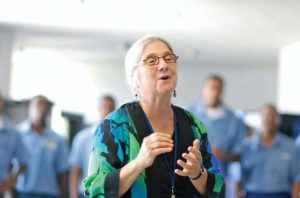 And when we create that choir, we create a little bit of that world. After the multimedia and intercultural extravaganza that was our collaboration on Kannikeswaran’s Shanti, an attending student of mine wrote: “(Afterwards) I just sat by the elevator, I didn’t want to move. I had never been in that diverse of an audience in my whole life. It was amazing and people were so friendly.” (3) Our artistic collaboration of many colors had manifested an audience of many colors.

Building effective performing coalitions requires getting to know people outside our usual circles, investing in those relationships over time, being curious about one another, and caring about one another. Sustaining these commitments through choral participation builds safer, more inclusive, and more creative communities. By musicking according to these practices, I have been able to live a choral life undivided from my own identities, beliefs, and passions—and undivided from the communities around me, despite rifts imposed by historical and political forces. When all of us can sing beautifully together, we can act together for justice, peace, equality, and radical social transformation.

(1) LeFanu, “Master Musician,” 1.
(2) An analysis of the repertoire list in the Choral Journal conference booklet issue, March 2017.
(3) This was written in a student reflection paper. It was so memorable as one of the outcomes I had intended for students in my Arts for Peace and Justice Global Studies Seminar.