The Lifetime Achievement Award honors the individual whose body of work has significantly impacted the global community around LGBT choral movement issues. The Lifetime Achievement Award recipient has contributed to exceptional progress in how LGBT people are viewed and represented in society, is a notable leader, and is widely recognized as a person of passion, vision, courage, and perseverance. Through 20 or more years of leadership the recipient has brought diverse groups of people together to enhance quality of life and the greater good.

The Distinguished Service Award honors the individual whose service to GALA Choruses, Inc., or multiple member choruses is above and beyond the call of duty. The recipient has been instrumental in moving the gay and lesbian choral movement forward either regionally or nationally, is tireless in his/her dedication, and is known by peers to provide exemplary service. The Distinguished Service Award recipient may have been involved in such areas as:

Nominations are now being accepted for the 2024 Legacy Awards in all three categories. To nominate someone for a GALA Legacy Award, download and complete this form and return it to Robin Godfrey at executivedirector@galachoruses.org. A separate form should be used for each nomination, and word counts may not surpass 200.

Awardees will be announced at Festival 2024 Minneapolis. The deadline for submitting nominations is March 31st, 2024. 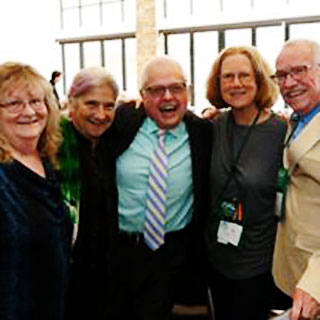 “GALA matters on so many levels. It reaches us individually with the courage of camaraderie. It inspires by reminding us that there are people just like us, doing the same thing we are so passionate about in cities all over the world. It provides the network that reminds us, deep down inside, that we are not alone! For me personally, it saved my life by providing the safety net I needed when I came out. It is still there to do that for all of us and those who follow. ”